Bottas claims pole at the Nurburgring 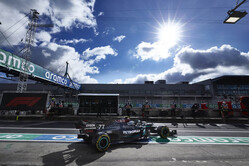 Returning after seven years, in which time, courtesy of the introduction of the hybrid formula and the changes to the aero rules, the cars have changed dramatically, this weekend was always set to throw up a few surprises.

Add in yesterday's fog-out, the greenness of the track, the inevitable concern over tyres, the clampdown on track limits, a resurgence (?) from Ferrari and Nico Hulkenberg drafted in to replace an unwell Lance Stroll and you have the recipe for an intriguing weekend.

Valtteri Bottas led a Mercedes 1-2 this morning, the weekend's sole practice session, while fourth-placed Max Verstappen was sandwiched by the Ferraris of Charles Leclerc and Sebastian Vettel.

Lando Norris was sixth, just ahead of Perez, Ricciardo, Albon and Gasly.

The dramatic change in weather conditions, while adding to the uncertainty as to how this weekend will evolve, looks set to continue, with further rain expected on Sunday.

All in all, this has the makings of another highly entertaining qualifying session and race.

Other than drivers being penalised for exceeding the track limits earlier, we also witnessed a number of mistakes - including a couple from Hamilton - and it is vital that there are no repeats over the next hour.

While in many ways it is a baptism by fire for Hulkenberg, his rivals have only had one extra hour of running here this weekend.

The lights go green, and understandably Hulkenberg is one of the first out, along with the Haas pair.

Grosjean posts 28.970 after Magnussen has his time deleted for running wide in Turn 4.

Hulkenberg subsequently posts 32.190, while Hamilton shoots straight to the top of the timesheets with a 26.703. Moments later, Bottas goes second with a 26.926.

On his first flying lap, Verstappen goes quickest in the first two sectors, finally crossing the line at 26.319.

Bottas leapfrogs his teammate with a 26.573, said teammate told he has "the magic available in Turn 11".

Albon goes fifth, ahead of Ricciardo, Norris, Gasly and Sainz.

Albon complains of a "big misfire out of Turn 7".

Grosjean's bid to make the cut is compromised when he runs wide in Turn 4. Meanwhile, teammate Magnussen goes sixth with a 27.231.

With just over a minute remaining, all bar the top four are on track.

The lights signals the start of Q2 and the Mercedes pair are straight out. They are both on mediums, as are the Ferraris. Verstappen is on softs as are most of the rest, though Ricciardo is on the yellow-banded rubber.

Ocon goes fifth, ahead of Sainz, Perez, Bottas, Leclerc and Ricciardo. Vettel is currently eleventh.
With 7:34 remaining, the Ferrari pair have the track to themselves.

Down in tenth, it looks as though Ricciardo will have to switch from the mediums to the softs. His teammate - on softs - is currently fifth.

Bottas is back on track, now on softs.

Hamilton is on a hot lap, he goes quickest in the opening sector and follows this up with a PB in S2. The world champion crosses the line at 25.390, to eclipse Verstappen by 0.330s.

A little silliness from Kvyat, who resolutely refuses to allow Vettel to pass.

PBs in the first sector for both Renault drivers.

Vettel goes tenth, but is demoted when his teammate posts 26.240 to go fifth.