Fans to be excluded from Portuguese GP? 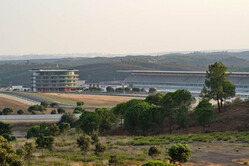 Officials in Portugal are considering whether to reduce the number of spectators allowed access to next week's Portuguese Grand Prix or exclude them entirely.

The move comes as the pandemic appears to be tightening its grip across Europe, and a number of countries consider tightening restrictions accordingly.

However, like a number of other European nations, in recent days there has been a worrying rise in new cases, with the Directorate-General of Health (DGS) reporting 2,608 cases on Friday, the highest number in a single day since the beginning of the pandemic.

Consequently, DGS is considering whether it will allow fans to continue attending sporting events, including next weekend's Grand Prix at Portimao in the Algarve.

As recently as August, it was revealed that almost 30,000 tickets had been sold for the event, though circuit bosses warned that if conditions worsened fans would not be allowed access.

Next weekend's race is also due to mark the first appearance this season of Formula One's prestigious Paddock Club.