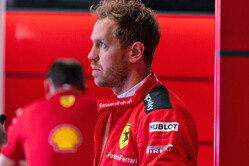 Whatever way you look at it, it simply hasn't worked out.

For whatever reason, and there have been mistakes on both sides, Sebastian Vettel never came close to emulating the success of his great hero, Michael Schumacher with the Italian team.

Yet while each race weekend that passes seems as though both the German and the team are going through the motions, Vettel insists that he wants to close this particular chapter with dignity.

"I've had the privilege to live through those emotions together with the fans, the team and with Italy, that's an enormous privilege," Vettel told reporters in Portimao.

"But like other things, things come to an end, so I'm very much looking forward to a new chapter that starts next year," he continued, referring to his move to Aston Martin, "but before that one starts I try to close the chapter here with dignity.

"I want to try to get myself back together so that I can deliver the performances that I know I can, overcoming those obstacles, and be ready for the new chapter.

"Obviously this year's car is not easy to drive for both of us," he admitted. "I'm sitting in all the meetings and I think we share the opinion, it's also not easy, but I think it is clear going into the season knowing that you're going to part ways it's always going to be a different sort of love story.

"Nevertheless I respect all the work going in on my side in the last years and therefore I'm willing to give my maximum back but obviously it's not been the easiest of years with where we are."