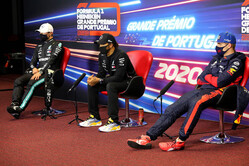 Max, another podium, well done. It looked pretty spicy on the first lap, the first few corners?
Max Verstappen: Yeah, it was very low grip. I just tried to stay out of trouble. Of course I had a little touch with Sergio, but he didn't leave me enough space to basically took himself out. From there onwards, it was raining a little bit and I just tried to keep the car on the track. Once everything was stabilised I overtook the McLaren cars. They had a lot of grip on the first lap, I don't know how. And then I did my own race. I went onto the medium tyres, we had good pace, but of course the gap was already so big that you can't really do anything.

Once you cleared those early runners and you could only see the Mercedes you had great pace there for a while but I guess the tyres went away from you?
MV: Yeah, but also they were on the hard tyre and I think that tyre was not amazing. Today the medium tyre was the definitely the best tyre, so it wouldn't have mattered if I had started on the medium because then I would have lost my time on the hards. Overall we finished where we deserved.

Valtteri, P2. You took off, in the early stages of the race, really quickly. You looked so comfortable. Obviously the McLaren was right up there with you, Carlos Sainz, but when you got established out front you were really there, under control?
Valtteri Bottas: Yeah, the opening lap was pretty good. There was a bit of drizzle and some cars behind with the soft tyre had the upper hand but I was pretty pleased I could get the lead. But after that I just had no pace today. I don't understand why, but no pace.

Take us through that overtake when Lewis... you really defended hard up the right hand side, Lewis sweeping through for the lead?
VB: Of course I tried to defend, but the rate he was trying to close, there was nothing really to do. Like I said, I don't know why I didn't have the pace today. I was pushing hard but couldn't go faster.

We heard you calling to go onto soft tyres to finish the race. You didn't get them of course. I think you knew you weren't going to get them, but that's what you wanted?
VB: Yeah, I was hoping to extend the first stint a bit and go for the soft at the end but I don't think it made any difference to the result today.

Lewis Hamilton, our winner today. Congratulations we are privileged to watch you making sporting history. Wow, did you do it in style.
Lewis Hamilton: Thank you so much. First of all, I really owe it all to these guys here and back at the factory for their tremendous work. They are continuously innovating and pushing the barrier higher every year, the target, and it's just been such a privilege working with them and I'm so grateful for all the moments. The reliability has been absolutely incredible, thanks to Mercedes and Petronas and all our partners who are continuously pushing again. No one is sitting back on their success. Everyone is pushing. Pushing and pushing and pushing. That's the most incredible thing to be surrounded by. It inspires you, that collaboration. There's nothing quite like it. Today was tough, but it was all about temperatures today and that's something I was able to, with the set-up, I was able to pre-empt it.

It was a bit of a struggle in the early few corners wasn't it. A little bit of rain, and rain the rain is falling now?
LH: Yeah, I mean they said it was going to rain straight after the race. We got some spitting just at the start. I got a good start but then going into Turn 7 and I got a huge oversteer moment and you know, you didn't know what was next. I really backed off massively. Arguably, I should have probably tried to defend from Valtteri but I was like "I'll come back later on" and fortunately that's what I was able to do.

You talked about some cramp in the closing stages of the race?
LH: Oh yeah. I mean, you know, it's an incredibly physical sport but I had a cramp in my right calf. I was lifting quite often down the straight because it was about, like, pull. Pretty painful, but I had to somehow get through it because it is what it is, you can't lift for the whole lap. You know, I could only have ever dreamed of being where I am today and I didn't have a magic ball when I chose to come to this team and partner with these great people but here I am and what I can tell you is that I'm trying to make the most of it every single day. Everything that we do together, we are all rowing in the same direction and that's why you are seeing the success that we are having. My dad's here, which is amazing and my step mum Linda is here, and Roscoe, it's a very blessed day.

Ninety-two Formula 1 victories. Extraordinary. What does that mean to you?
LH: Phew. It's going to take some time for it to fully sink in, but I was still pushing flat out coming across the line. I'm still very much in race mode mentally. I can't find the words at the moment.

Lewis, many congratulations. No one in the history of Formula 1 has taken more wins than you. You are out on your own. Can you describe your emotions as you crossed the line here in Portugal?
LH: Well, thank you. I think ultimately just very proud of the job that I felt I was able to do today and the thing I was able to overcome, but also the job we have done collectively as a team and it's just reminiscent of the beginning when I joined the team, the decision I took to join the team and what we have done since. Did I think we would get to... I knew that we would win championships. Did I think we would win as many as we have? No. Did I think we would win this many races? Of course not. But it is a phenomenal time for us and the great thing is that it's not just me that is living with the history, it's the whole team and I think everyone acknowledges and realises how much they are part of it, so I feel incredibly grateful to my teammates. To Valtteri, for being the contender he is, the team-mate he is, for pushing the team forwards - we're generally rowing in the same direction whilst we are competing, and it's been a privilege to work with him. So what a time to be alive.

A lot of people are probably wondering how far you can go. How high can you raise the bar?
LH: I don't believe in the saying the sky's the limit. It's just a saying. It depends how much we want it, how much we want to continue to raise the bar and going by our history together, just the way we work, we don't sit back on our results, we keep working, we keep elevating. Every race feels like the first one. I don't know how that's possible after all these races but for me it does, just as challenging as the first, and I think there is a lot more for us to do. Especially as we're in this crazy time of the pandemic. We're in a crazy time with having to also utilise our position as a business, as a leader in the business for inclusivity, for diversity, there's a lot of work to do. So, that keeps me inspired. My team-mates, who are continuously growing, my fans who are continuously learning through this process with us all, and our sport that is slowly changing, it's a real special time. I definitely sometimes wonder, you know, jeez I'm 35 years old. I still feel physically strong but you still wonder when is it going to tip over and lose performance but showing by today it's not yet.

Valtteri, coming to you. Let's start at the beginning. What was the grip like from P2 on the inside of the grid today?
VB: First of all I want to say massive congrats to Lewis for this amazing achievement and being part of motorsport history, mate. Actually, some of the interviewers were saying that what do I think about it because many people thought it's never possible to break the record but that itself is a mistake and I'm sure Lewis always believed it is possible and he'll just keep going. So, really, hat's off. Big respect.

LH: Thank you mate, appreciate it.

VB: From my side, yeah, it was a tricky race. About the start, definitely the right-hand side was rather slippery but I'm pretty sure it looked a bit weird for the spectators and for the viewers, looking at the first lap but there was actually quite a bit of rain in the first laps, so that's why the warm up was really poor, especially us being on the Medium tyre, the warm-up was quite a bit weaker than the guys with the soft tyre, so I think I managed to make the most out of it with the Medium tyres in the first few laps but yes, it was tricky.