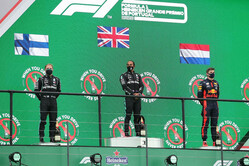 On a weekend we've seen the immolation of an AlphaTauri, over 200 times deleted, Sebastian Vettel admit that his teammate is on a different planet, Max Verstappen censured for his radio outbursts and virtue signalling from The Sun, surely anything is possible.

A few weeks back the media was getting excited about Lewis equalling Michael Schumacher's record of 91 wins and then Valtteri went and temporarily spoilt it all. Fast forward and the same media is getting all excited at the prospect of the Briton surpassing Michael's record.

Thing is, who might spoil it this time around?

Valtteri had looked strong all weekend, but courtesy of balls the size of pumpkins and a brave tyre strategy, Lewis raised his game when it really mattered, breaking his teammate's heart in the process.

However, with Max starting on the softs today - whereas the Black Arrows and Charles are on mediums - might the flying Dutchman steal a march on his rivals.

Consequently, Valtteri, like the other drivers starting on the same side of the grid - Charles, Alex, Lando and Daniel... are at an immediate disadvantage.

And then, assuming they do get away decently, there's Turn 1.

The first corner has rarely been out of the headlines this weekend, what with the seemingly endless deletion of times for wandering astray, the coming together of Max and Lance and the various other near misses that followed.

Indeed, those members of the media hoping to see Lewis surpass the 'magic 91' might well be advised to turn away from their screens for the first few moments of today's race.

Indeed, on a weekend where the expression 'anything might happen' has become the mantra, it would be foolish to make any predictions.

What we do know however, is that the very nature of the Portimao track, be it the lack of grip, the undulations, the blind corners and even the weather, make this afternoon highly unpredictable... which, when we reflect on the fact that Mercedes has won nine of the races thus far, is exactly what we all need.

Lewis has won the title, it would be foolish to suggest otherwise, but even he wants his rivals to make a race of it, and Portimao offers just such an opportunity.

Indeed such is the excitement at the unpredictability Pirelli totally forgot to include its guide to strategy in its post-qualifying press release.

According to the Italian manufacturer, the fastest strategy is a one-stopper, but Pirelli admits that with comparatively little running in free practice and consequently a lack of data in terms of wear and degradation levels, to predict the best strategy is harder than usual.

On paper therefore, the fastest strategy is to start on mediums and then move onto hards at around lap 32. Of course, the exact opposite can apply, starting on hards and then switching to mediums after 34 laps.

Second-quickest is another one-stopper, using soft for 18 laps, then hards for 48 laps.

A two-stopper is slower, but still an option if lower temperatures favour graining. In this case, the best option would be soft-medium-medium, with the softs for 14 laps and then two 26-lap stints on medium.

While the title(s) might be decided, there remains a lot to play for, not least third place in the Constructors' Championship - the one that decided the prize money.

However, Alex is on notice that here and again next week at Imola he must close the gap to Max or risk losing his seat for 2021. And with Christian Horner admitting that if a replacement is required for the cat-loving Thai, he will come from outside the Red Bull driver pool, what better time for the likes of Sergio to throw their hat in the ring.

George's seat at Williams isn't looking too safe either, and let's not forget that Alpha, Alfa and Haas have yet to confirm their line-ups, so there's plenty to play for.

The pitlane opens and one by one the drivers head out. Though there is a lot of cloud they are not expecting rain until after the race ends. On the other hand it is cooler than it has been on previous days.

Perez is warned of strong tailwinds at Turns 13, 8 and 5. The Mexican is told that he cannot perform a practice start, even though he's seen a McLaren driver perform one.

"It's like on ice, really difficult to get the tyres to work," reports Vettel. Indeed, Gasly is told that a lot of drivers are complaining about grip.

"Be careful with your radio because it is so loud," begs Kimi.

Race control now reveals that there is a 40% chance of rain...

Other than the Black Arrows and Leclerc, Ocon, Stroll, Kvyat, Russell, Vettel, Giovinazzi, Grosjean and Latifi start on mediums. The rest are t on the softs bar Magnussen who is on hards.

They head off on the parade lap, all getting away cleanly.

The grid forms, Hamilton on his spot some time before Latifi takes his place and slightly behind his marker.

The Mercedes pair both get away well, as does Verstappen, but Bottas then appears to struggle allowing the Red Bull and Perez to get ahead heading into Turn 1, as Leclerc also closes in.

In Turn 1, Leclerc is somewhat cautious, while in the process of passing the Ferrari Sainz runs wide.

In Turn 2, Bottas, having found some grip, is side-by-side with Verstappen, the Dutchman running wide as they battle for position.

Perez makes a move on Verstappen and clips the Red Bull sending the Point into a spin, from which he is lucky not to collect a number of drivers who subsequently pass him.

Amidst claims that there is rain, Hamilton begins to lose pace, his cause not helped by running wide in Turn 5, Verstappen repeating the Briton's mistake moments later.

Hamilton continues to struggle, and in the process is passed by his Mercedes teammate, with the battling Sainz and Verstappen closing in.

Sainz passes Hamilton, who continues to struggle and is now under pressure from Norris, Verstappen and Leclerc.

That said, Raikkonen - who has had the mother of all opening laps - is all over Leclerc, the Iceman subsequently passing the Ferrari and closing in on the Red Bull.

Heading into Turn 1 at the end of the opening lap, Sainz is all over Bottas as Perez pits after his clash with Verstappen. Meanwhile Raikkonen, Verstappen, Leclerc and Ricciardo continue to scrap.

It's: Bottas, Sainz, Hamilton, Norris, Verstappen, Raikkonen, Ricciardo, Leclerc, Gasly and Stroll at the end of lap 1. Albon is 11th and Vettel 16th.

Following that manic opening lap things appear to have settled down a little... at which point Sainz appears to catch Bottas napping and calmly sweeps by the Mercedes to take the lead as Hamilton also closes in.

Behind, Verstappen is all over Norris, with Raikkonen and Ricciardo right behind.