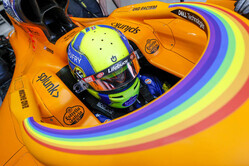 Lando Norris has revealed that the apology he issued on social media this week was intended for Lewis Hamilton and not Lance Stroll.

On Tuesday, amidst online criticism for comments he made over the course of Sunday in Portugal, the McLaren driver took to social media to issue an apology.

"I owe an apology," he wrote. "I've been stupid and careless with some things I've said lately in media and interviews, and haven't shown the respect I should have to certain people.

"I'm not that kind of person, so know I should apologise to them but also everyone reading/listening. Sorry."

The youngster was receiving criticism for his language over the team radio after clashing with Stroll - using a term Larry David might describe in association with the word ‘beloved' - while also downplaying Hamilton's achievement of becoming the winningest driver in F1 history.

"I'm happy for him, nothing more," said Norris when asked about the world champion's achievement. "It doesn't mean anything to me really," he added. "He's in a car which should win every race basically. He has to beat one or two other drivers, that's it. Fair play to him, he's still doing the job he has to do, but yeah, just another win for him."

Speaking to reporters in Imola however, Norris was keen to clarify Tuesday's apology, making clear that it was intended for Hamilton only.

"They were more, the comments, about Lewis and him reaching 92 wins which I have a lot of respect for," he said when asked about the apology. "I just didn't choose the right words to put that into context.

"I apologised, but I also apologised to Lewis himself, I messaged him," he continued. "I don't know if he knew about it at the time, but I never mean to say something like that in a bad way or to put any bad light on him at all.

"I respect everything he's done to achieve what he's done, it's incredible no matter what. Just the way I put it was not the way I wanted to put it across. I said what I said, I apologised and I just got to move on."

Despite claims that his reaction to Hamilton could be termed "racist", Norris insists that he didn't feel any outside pressure when making the apology.

"It was all done off my own back," he insisted. "No one pressured me, it wasn't even anything someone said. It wasn't something that many people even noticed, but I woke up in the morning and I looked on social media and there was just a lot more bad comments than good about the things I said.

"I never mean any of it to be put in that way or taken out of context in a bad way, especially against Lewis. I saw how it was going down and I felt bad, because it's not the person I am in any way, to put shame on anyone or not have the respect for such a driver.

"I made the decision in the morning to put up the tweet and just issue my apology and message Lewis at the same time to set things straight."