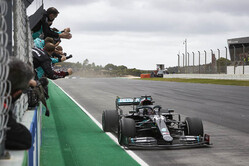 Other than Max Verstappen, Carlos Sainz, Valtteri Bottas... Kimi Raikkonen and everything else the Portimao track threw at him, Lewis Hamilton has admitted that on his way to claiming the 92nd Grand Prix win of his career he also had to fend off cramp.

"I started having small cramp," he revealed, "it's a very physical circuit but your throttle pedal... there's lots of bumps, undulations, you're applying the throttle pretty aggressively for pretty much every lap all the way and you never really get to rest.

"I was coming out of the last corner, coming around Turn 15 onto the straight," he continued, "and I got the feeling that it was about to pull, like you're pulling a muscle, and it popped and it hurt so much. I had to lift and I didn't really know what to do, because every time I applied it the pain was there.

"Of course I can't stay off the gas, I've got to keep going," he laughed, "so it's just mind over matter, I just had to keep pushing.

"It was pretty excruciating for a couple of laps," he admitted, "but then it started to kind of... I don't know whether blood starts rushing to it and the adrenalin takes over but I've definitely got a bit of a knot in my knee, my calf."

His win not only assures him of another mention in the history books, it takes him closer to matching Michael Schumacher's seven titles.

"Ultimately I'm just very proud of the job that I felt I was able to do today, and the thing I was able to overcome, but also the job we have done collectively as a team.

"It's reminiscent of the beginning when I joined the team," he continued, "the decision I took to join the team and what we have done since.

"It is a phenomenal time for us and the great thing is that it's not just me that is living with the history, it's the whole team and I think everyone acknowledges and realises how much they are part of it, so I feel incredibly grateful to my teammates. To Valtteri, for being the contender he is, the team-mate he is, for pushing the team forwards - we're generally rowing in the same direction whilst we are competing, and it's been a privilege to work with him. So what a time to be alive."

Having broken just about every existing record, asked how much higher he envisages he can raise the bar, he replied: "I don't believe in the saying the sky's the limit. It's just a saying. It depends how much we want it, how much we want to continue to raise the bar and going by our history together, just the way we work, we don't sit back on our results, we keep working, we keep elevating.

"Every race feels like the first one. I don't know how that's possible after all these races but for me it does, just as challenging as the first, and I think there is a lot more for us to do. Especially as we're in this crazy time of the pandemic. We're in a crazy time with having to also utilise our position as a business, as a leader in the business for inclusivity, for diversity, there's a lot of work to do.

"I definitely sometimes wonder, you know, jeez I'm 35 years old. I still feel physically strong but you still wonder when is it going to tip over and lose performance but showing by today it's not yet."