Mercedes ready to break the bank for Hamilton? 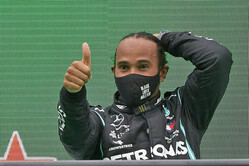 Basking in the warm glow of their partnership breaking yet another record, it was understandable that Toto Wolff would be asked when a new deal would be struck with Lewis Hamilton.

Both the Briton and his Austrian boss have been asked about a new contract for as long as anyone can remember, and while it has been generally accepted that the customary 'announce' of new deal could wait, especially in the wake of the global disruption caused by the pandemic, sections of the media are getting restless.

As the world hailed Hamilton's achievement in becoming the winningest driver in the history of F1, when asked about a new deal, Wolff took the opportunity to take a gentle swipe at rivals McLaren.

Asked how the record-breaking win in Portugal, not to mention the inevitable seventh title, will influence the financial side of his discussions with Hamilton over a new contract, the Austrian joked: "It's huge... we have to sell plenty of inventory...

"Sell a leaseback of the buildings and just come up with the money," he added, a clear reference to McLaren's desire to sell its Woking facilities and then lease them back.

"In ten or twenty years, we're going to look back and really acknowledge what a special driver he was," the Austrian continued.

Playing down concern that his own future with the Brackley-based outfit is unclear, he said: "Where we stand today is that everybody has the will to continue.

"With Lewis and I, it is simply that we are living like hermits and I think our team is particularly disciplined. I was in Monaco last week, but we decided not to meet because the worst that could happen is me dragging corona into our meetings.

"It simply wasn't the time to sit down and meet. I hope we can finish the next couple of races on a high and then concentrate on the contract."