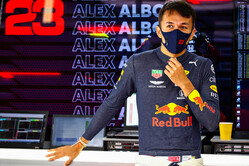 His podium result at Mugello long forgotten, a poor performance in Portugal allowed the Sky team to ramp up its criticism of Alex Albon once again.

Even though newcomers to the sport might wonder whether the Thai driver has done something to offend them or whether members of the Sky team have ties to the likes of Pierre Gasly, even Albon's staunchest supporters, even his five cats, would be hard-pressed to defend a miserable performance in Portugal which saw the Red Bull driver finish outside the points, lapped by his teammate.

Nonetheless, despite the media pressure, Christian Horner insists that the youngster will keep his seat until the end of the season.

"We're committed to Alex for this year," said Horner, who had previously suggested that the youngster had two races (Portimao and Imola) in which to close the gap to his teammate, Max Verstappen.

"He's a great guy," he continued, "we believe he does have talent, he's still only in his second year of Formula 1.

In the wake of calls from the Sky team that Gasly should be placed in the second Red Bull with immediate effect, Horner looking ahead to next season, said: "The reality is there's not so many races left in the season. It's getting to that time of year where we need to start thinking about that. I think within the next few weeks we're going to have to make a decision. We know what all the options are.

"I don't think we'd be doing our job if we didn't look at the situation within Formula 1 that there are obviously drivers that have significant experience and ability, it's a very unusual situation they could be available," he added, a clear reference to the likes of Sergio Perez and Nico Hulkenberg.

"So our first and foremost priority is to give Alex the opportunity to lay claim to that seat. Let's not forget when he jumped in that car last year he outscored and outperformed Pierre significantly in the balance of 2019."

"I think both cars struggled off of the line," Albon told Sky Sports of his difficult afternoon. "We didn't have grip at all to start the first lap, as it was all over the place.

"There were some tyres that clearly switched on for some teams, the McLarens, and Kimi was flying and looking like he was on a different track to us.

"It was just really tricky on those first two or three laps, and that is when we lost the positions. Once the tyres were up to temperature the car was actually pretty good.

"We spent the whole race under the gearbox of another car," he sighed. "We knew it was going to be hard to overtake here but I was struggling a lot at Turn 14 so you never really stayed close enough to get an opportunity into Turn 1.

"That was really it, the pace of the car was good but I couldn't really use it so it was frustrating, we did try the two stop and in hindsight it didn't work, but that was it."