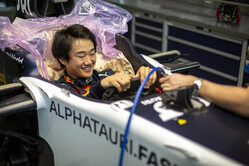 Japanese star, and Honda protege, Yuki Tsunoda, is set to make his FP1 debut before the end of the season, according to AlphaTauri boss, Franz Tost.

The youngster is currently third in the F2 championship, 44 points behind Mick Schumacher with four races remaining.

The 20-year-old must finish fourth in the championship - or higher - to be eligible for a superlicence which would allow him to enter F1 next season.

Already scheduled to take part in the end-of-season test in Abu Dhabi, Tsunoda is also set to run a 2018 Toro Rosso at Imola next month following the Emilia Romagna Grand Prix.

"The driver line-up is not decided yet for next year," admitted Tost at Friday's official press conference.

"The programme with Yuki, we had him in the factory last week to make his seat because after the race in Imola we will do a 300 km test," he added.

"Maybe, this is not decided yet, he will do FP1 once."

While Red Bull has Max Verstappen confirmed for next season, it has yet to =name his teammate, while at AlphaTauri neither driver has been named.

"He has another two races in Bahrain and we will see where he is finishing the F2 championship with regards to the super licence," said Tost.

"Then he will do the Abu Dhabi young driver test and then Red Bull will decide who will be the driver line-up will be for AlphaTauri in 2021."