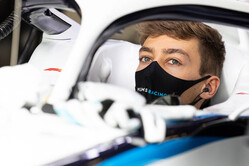 In recent days, despite having a contract for 2021, there has been media speculation over George Russell's future with the Grove outfit.

Speaking at today's official press conference, Roberts further muddied the waters by refusing to confirm that Russell - or teammate Nicholas Latifi will remain with the team.

"I'm not going to say anything about either of our drivers," he said. "They've both done a great job.

"There's so much speculation around," he added. "I don't want to inadvertently fuel it. Someone will take some nuance of what I say, so we're happy. Let's watch the rest of the market.

"I'm just not going to talk about it," he insisted. "Dorilton bought the team, nothing changed with regards to the drivers. There's just so much speculation and rumour, it's crazy. It's silly season after all. We're not saying any more than that."

Asked to end some of the speculation by ruling out a move for Sergio Perez, Roberts said: "We don't want to say anything, one way or another.

"We're here focusing on a race weekend. We haven't got any news. Gunther is here, he has got some news.

"We've got plenty on this morning. We're running lots of parts in FP1 and we've got to get through all of that and get our drivers in the best possible place for Saturday and Sunday."

Pressed again on the driver situation however, he simply replied that any decision will be "made by the management committee and the board of Williams Formula 1", insisting that this is "a very normal situation".

"We've nothing to say on that matter right now," he added. "That's all I can say."