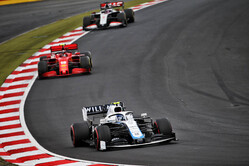 George started the race 17th, with Nicholas lining up 18th, both on the soft Pirelli tyre. Nicholas ran a two-stop strategy, pitting first on lap 14 and then on lap 33 for the medium compound on both occasions.

Dave Robson, Head of Vehicle Performance: It is a shame that George's race ended as soon as it did as he was making decent progress and was in a good race with the cars that eventually finished in the points. Nicholas was unfortunate with the timing of the safety car, which helped our rivals more than us. However, overall, we didn't have the pace to achieve a better finish today, but we have enjoyed our return to the Nurburgring and the shortened race weekend, which made yesterday quite difficult but has served as useful preparation for the upcoming race at Imola.

Nicholas Latifi: It was a challenging race today and I was pushing as hard as I could. I can't pinpoint why exactly, we were just lacking overall pace, especially compared to the Haas and the Alfa. We were put in a good position after the safety car, but we had faster cars on new qualifying tyres behind us. I had some fun battles with Daniil (Kyvat), I think for the last five or six laps I was defending into turn one, battling through one, two and three, so it was fun to have that fight. We will have to go away and analyse to see why we were lacking pace this weekend.

George Russell: It was a very frustrating way to finish the Eifel Grand Prix. I was racing with Sebastian (Vettel), and Kimi (Raikkonen) was close behind. I overtook Sebastian in the corner before, but he got the DRS to re-pass me. Kimi was close behind fighting with us, he made the mistake, lost the car and crashed into me which damaged the car and gave us a puncture. There was too much damage to bring it home and we had to retire the car, but that's just racing sometimes.

Up until then, the car was feeling was good and we were on pace with the guys around us. We were on a slightly different strategy to those we were racing, so there were opportunities there. It is a shame because the way that this race has panned out there was definitely an opportunity there.