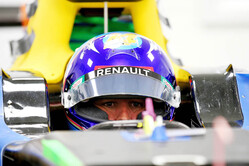 Ahead of his return to the grid next season, Fernando Alonso is to drive the 2020 Renault at Barcelona today.

Renault has made no secret of its desire to get the two-time world champion into a car as soon as possible, and had been pushing for him to participate in the post-season test in Abu Dhabi.

Speaking at the weekend, following Daniel Ricciardo's drive to third, team boss, Cyril Abiteboul revealed that Alonso, who recently visited the Enstone facility and spent time in the simulator, was in constant contact with the team.

"We received a message before, during and after the race," said the Frenchman. "You would be impressed to measure his level of interest. Though I think that when he initially joined the team, and in his communication when we announced him, it was very much about 2022.

"Fernando is like a big shark... and as soon as he starts to feel the blood he wants to attack. That's what I see... I see a shark very hungry."

Two days later, Renault took to social media to announce that "20 years after his first test with Enstone, in Barcelona, Fernando Alonso is driving the R.S.20 today, at the same circuit".

"It's going to be an amazing feeling, after two years not driving an F1," said Alonso in a team video accompanying the news. "I'm really looking forward.

"I think it's going to be like a new beginning," he continued, "getting surprised about the speed of the car, the braking performance, the cornering speed, a lot of things that will surprise me once again, and I'm looking forward.

"It is very special to be back in Barcelona. I remember my first test with Benetton in the year 2000 was in Barcelona, and it's going to be in the same circuit twenty years after that first test, it's going to be one of the last opportunities with the car name on the Renault brand, because next year it's going to change. I feel very privileged and I'm looking forward and very excited.

"Preparing for this test was not easy," he admits. "With the COVID situation it was not the normal preparations, not many days in the simulator, but nevertheless we are ready.

"It's only 100kms, it's a filming day, so we try to maximise those laps and try to get some images and some filming. I know that I will learn and will discover a lot of things during those laps. I will take it with a very open approach and try to learn as much in every kilometre."

As the 2020 car is being used, Renault is taking advantage of the rules which allow teams to run their current contender for up to 100 kilometres for filming and promotional purposes.