Renault calls for engine regulation change to be brought forward 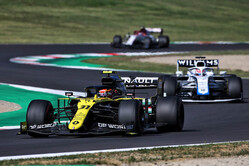 While the much-anticipated change to the aero and chassis rules comes in in 2022 - having been deferred from 2021 due to the pandemic - the rules pertaining to engines are not due to be overhauled until 2026.

However, in the wake of Honda's decision to leave F1 at the end of next year, citing its desire to focus on electric vehicles, Renault - the driving force behind the introduction of the hybrid formula in 2014 - believes the overhaul of the engine regulations must be brought forward.

"I want to be very clear that we take no satisfaction in the Honda situation," Renault boss, Cyril Abiteboul tells Autosport. "We need to call it the way it is," he continues, "it's not a positive development for F1.

"We want an F1 with car makers, with OEMs, with engine suppliers, and being down to three engine manufacturers is not a positive development.

"We need to draw some clear conclusions from this situation, and it's something I've been urging the governing body to look at more carefully.

"The engine situation is simply unsustainable," he insists. "In particular from an economic perspective, but also from a technology perspective. I am not sure we can afford this perception. Either we're capable of changing this perception of the current engine architecture, or probably we need to fast track the adoption of a new architecture, so that we get in a better place in terms of perception again.

"I would expect that this development triggers some harder thinking about the scheduling of the next generation of power trains."

Returning to F1 a year after the hybrid formula was introduced, the Japanese manufacturer was always playing catch-up, and while it has recovered from those disastrous initial seasons with McLaren, due to the strict rules preventing serious development this essentially remains the case.

Abiteboul believes that Honda's experience, having invested vast sums of money for little competitive gain, will scare off potential manufacturers from entering the sport.

"The entry ticket is so high in terms of costs, but also in terms of technology," he says. "Even if you spend an awful lot it's going to take you a while before you get there. We've seen a demonstration of that, although obviously now we're feeling a bit better.

"But you could be standing on an island and saying it's all good and fine because we've crossed the sea, but that sea is simply too wide and too hard for the sustainability of F1.

"There has been a bit that has been done, but it's not enough," he warns. "We need to be harder on that.

"Just like we've done a lot on the chassis side in the last few months, we need to hit very hard on the engine side if we don't want F1 to be hurt on this aspect."