Drivers to test 2021 tyres in Bahrain 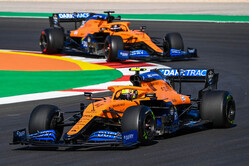 Following their first taste of the 2021 compounds in Portugal, drivers will get another chance to sample the tyres this weekend in Bahrain.

With the decision to defer the introduction of 18-inch wheels until 2022, along with the raft of new aero regulations, Pirelli is to update its tyre compounds for next season.

The tyres originally due to be used this season were rejected by the teams consequently they are using the 2019 compounds.

In the first half-hour of FP1 in Portimao the teams were given a 'blind test' of the 2021 prototypes, each team given three sets, with one car required to complete a longer run while the other focused on a back-to-back comparison over short runs.

This weekend, ahead of a further test at the Abu Dhabi Grand Prix, the teams will have two sets of the 2021 C3s to sample on Friday for each car, on top of the usual allocation for the weekend (two sets of the hard, three sets of the medium, and eight of the soft).

There will be a similar opportunity in FP2 at the season-closing event in Abu Dhabi, with a set of C4 tyres for each driver.