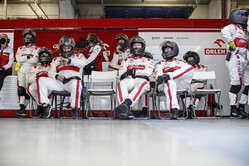 Teams admit concern over the proposed 23-date 2021 schedule, not least the back-to-back triple-headers.

With the pandemic hitting the sport's coffers hard, the teams were in no mood to argue when F1 bosses put together a punishing schedule of 17 races in less than six months this year.

Integral to the schedule was the inclusion of four triple-headers, just a couple of years after the previous attempt at one triple-header left most saying 'never again'.

While there remains doubt over the slot initially put aside for Vietnam, the schedule features 23 races and two triple-headers, one featuring the Belgian, Dutch and Italian Grands Prix, with the second, featuring the Russian, Singapore and Japanese events just one week later. Six races in seven weeks.

Unsurprisingly, the teams have their doubts.

"I went through, with our team manager, on the calendar and we analysed everything," said Franz Tost. "It's possible, but it's on the limit because we must not forget that people are out sometimes for three weeks and that's really a long period and I think what's currently in the calendar is the absolute limit and should not be extended."

"I think the main issue is that if you want to put 23 races in eight months that you have no other option," added Alfa's Frederic Vasseur. "I'm a bit more concerned about the second one with Sochi, Singapore and Japan because it's close to the end of the season. It's a flyaway and for the mechanics, for the team and also for the stock of spare parts it won't be an easy one but I think that we have no other option if we want to do 23 races per year."

"One triple-header is painful for the staff," agreed Renault's Marcin Budkowski, "two triple-headers, one after the other is even more difficult.

"My understanding, from some of the discussions that took place with Formula 1 is that it was intentional to back-load the calendar if you want to have more races, concentrated at the back of the season for the obvious COVID situation and therefore less risks taken on the early races. So hopefully, again, that's a consequence of the current situation and an extension of the 2021 changes that were made and not a constant feature.

"Equally, we've preserved the summer shutdown which I think is essential, especially for the travelling staff."

"The teams are the beneficiaries of growing revenue and growing income," said Toto Wolff. "The teams still take a large chunk of the EBITDA and in that respect we all need to support (it) for the business to grow.

"On the other side a couple of triple-headers will take a toll on the people," he admitted. "I think there is an Asian triple-header that will mean we are more than three weeks away from home and that is certainly not something that is great.

"You must not forget that the hardest working people are the ones that set up the garages and take them down and the mechanics that will have overnighters if something goes wrong, [and they will] suffer, no doubt about that.

"You need to question how long that is sustainable and whether you implement a different system by having a second crew that can take over these toughest roles and this is something we are looking at at the moment."

"It will take a toll on the people," admitted Guenther Steiner, "but I think, especially in the times we are in now, we need to do it, but then FOM needs to look into it; if it is something we want to do for the long term or it's just a one year off. If this many races are sustainable and if there is no saturation coming in by the spectators, if it actually is beneficial or not, and on the people side of it we need to come up with plans that we don't overwork them.

"We overwork them anyway," he added, "but we need to be clear that we cannot demand that all the time.

"That is part of our job. If it gives us more revenue we need to come up with ideas where we make it sustainable for ourselves, where we don't need to wait until we are told to do that.

"It's part of where Formula 1 is going. We will just find out in a few years if it is the right or not, if more races is the right way.

With the cars little changed from this season, another Hamilton/Mercedes walkover is almost guaranteed, and as a result - the pandemic aside - the sport will be hard-pressed to maintain fan interest over the full course of such an intense schedule.