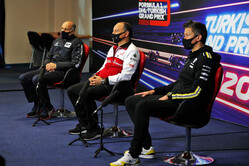 Fred can we start with you? First impressions of Istanbul Park. What conclusions can we draw after FP1?
Frederic Vasseur: It was a good session on the ice! It was a very tricky one for everybody. I think it was almost difficult to keep the car on track, but it will improve during the weekend and it will be more a question of the weather forecast and something else for tomorrow.

What about the feedback from the drivers? Were they enjoying the fact that it was an ice rink?
FV: I don't know if enjoy is the right word, because it was too slippery this morning but at least the layout of the track, and the track is a very good one... I remember the race 10 years ago, it was always good events and I am pleased to be back in Istanbul.

Sauber are celebrating 500 races this weekend. You've run your own teams in the junior categories, you've worked for Renault in the UK - what makes Sauber different?
FV: It's in Switzerland, first, that's a big difference! Seriously, it's an important milestone for the company. I'm not a big fan of numbers and statistics and so on, but if you have a look back, to do 500 races, for a company it's a huge achievement. It was not always easy, it was sometimes very difficult, sometimes successful, but at least the company did very well over the last 25 years in F1, 27, and 50 years in motor racing. It's a great feeling for the company today.

What about for you? Are you proud to have the responsibility of leading a team with so much heritage?
FV: Yeah, but you know it's a picture of today. I'm more... very happy for Peter. He launched the company 50 years ago and it's more an achievement for him than for myself.

Franz, let's start with your impressions of Istanbul Park?
Franz Tost: First of all we are happy to be back at this fantastic race track. Of course today the cars didn't have so much grip out there but it was also exciting to see Formula 1 cars sliding around. It was a result of the new surface and the low temperatures, therefore it is difficult to get temperature into the tyres but in the last 20-25 minutes of FP1 the cars looked quite stable and I think in FP2 and tomorrow and also for Sunday everything will work in the way as we expect.

Now Franz, if I could take you back to last week where F2 star Yuki Tsunoda tested one of your cars at Imola. Could you just give us a resume of how he got on?
FT: He got on very well. He was immediately familiar with the car, with the brakes, with the G-forces, with the steering. He gave good technical feedback, good co-operation with the engineers, no crash, no spin. He did a really good job.

Was he quick?
FT: He was also quick, yes. Otherwise he wouldn't have driven.

Now, looking ahead to this weekend and the rest of the season, the battle in Constructors championship - can you catch Ferrari in sixth place or was Gasly's retirement at Imola a hammer blow for you guys?
FT: Of course, the retirement of Pierre at Imola was a big disadvantage but nevertheless there are another four races to go and we will score as many points as possible and if it's more than Ferrari, if we can overtake them it's fantastic but it's not our main goal. We want to finish the races in the points and to score as many points as possible.

Can we say, on recent performances, whether you think you have the third fastest car?
FT: This, I would doubt. If everything is working together I think that Racing Point's car is a little faster, also the Renault is very fast. But we are close to all these teams, also to McLaren and then it depends on the different race specs, on the track layout whether we get together from the set-up and how we can get the tyre under control but I'm quite confident for here and for the rest of the season.

Marcin, so, who has the third fastest car in Formula 1? You guys are involved in a tremendous battle for P3 in the Constructors' championship.
Marcin Budkowski: I think it's difficult to say. I think, as Franz was saying, it depends a little bit on the weekend and on the conditions. Certainly it's a very very tight fight for P3. Renault are one point ahead of Racing Point and McLaren so it's difficult to imagine a tighter battle. We've lost valuable points to reliability the last few races which is something we're not happy about and we are working very hard to get that back under control because that could be the deciding the factor. It's good to have a fast car but you need to have a reliable car to score the points. I think, here it's been... just judging by this morning, we've had a particularly difficult start this morning on the very low grip track, it's a bit like Portimao to the power of ten so it's going to be an interesting afternoon session for us to try to recover the control over the tyres and therefore a decent pace.

You talk about reliable car, quick car; can I just ask you: what has been the key to unlocking the potential of this year's RS20, because since Spa, really, the car has flown? What was the trigger point?
MB: I think it's a combination. I think the car is clearly a better car than we had last year. We addressed some of the major weaknesses we had on last year's car. We've made good progress during the season, we've made good upgrades and that's obviously pushed us forward in the pecking order, but we've also understood the car better and I wouldn't call it a breakthrough but it was progressive learning and understanding of the car and therefore in parallel, you understand the car better and you improve it and when all these things come together you start to perform better and we're in such a tight group, the differences are so small in the midfield cars that by being in the front of the group, you're taking the opportunities such as podiums as we've seen such as the big points.

And Daniel, in particular, is flying at the moment. How much will you miss him in 2021?
MB: He's at the top of his form, he's driving exceptionally well and that shows in the team results but also in his personal results so of course we will miss him but we will also miss the character. He's a smiley, engaging character which is a pleasure to work with him. Daniel walks in the room and suddenly the mood in the room picks up because his smile and his enthusiasm is infectious.

(Luke Smith - Autosport) Marcin, about Fernando Alonso and his plans for next year. Obviously he's got a test coming up in Abu Dhabi - it's been announced by the team. I just want to know how you saw the simulation has been going, what kind of feedback has he been giving you so far and I guess what more plans do you have for him in terms of getting up to speed between now and the end of the season?
MB: So yeah, Fernando drove two days the 2018 car in Bahrain and he will do another two days on the 2018 car again in Abu Dhabi over the weekend. He's also done a filming day on the 2020 car so he's taking every opportunity to drive. We had tests planned for young drivers, for the academy, with the '18 so we just added some days to get Fernando to drive, so that was a good opportunity. He wants more days in the car, he wants more days in the car to get used to the team, to get used to the systems, the procedures, to fine tune his seating position, the steering wheel, everything. But also he hasn't driven the car for two years and they are bloody fast cars - sorry for the wording - and then he needs to get back in shape, get back in the rhythm so he's taking any opportunity he can to drive. In terms of his enthusiasm, in terms of his determination, he's been at the factory, obviously, to do some seat fittings and it was an opportunity... I took him round the factory to show him how things had changed since he was there in Enstone a number of years ago and obviously a lot has changed since then and his motivation is incredible, he's really asking everybody, pushing and you spend a few minutes with him and you're straightaway... you're more motivated so it's great for the staff to be exposed to someone like this who is not only a great champion but also is so motivated for next year and the next years to come.

(Scott Mitchell - The Race) Follow-up question to Marcin on Fernando: obviously he's got more running in the 2018 car and try to run him as much as possible but what can he actually learn driving the 2018 car? What are the limitations and just generally how impressive has it been how he seeks every last little bit of detail he can get from anything he throws himself into as he prepares for his comeback?
MB: As I said, partly it is him wanting to get back in shape and get back in the rhythm of driving a car but it's an opportunity to drive... to work with him on things like the steering wheel, his favourite button position, how he wants to be able to activate all the differences in the car, practise our procedures. It seems simple but the more we practise these things, the more we have to do during the winter testing. We only have three days of running for our two drivers in winter testing next year so practising FIA procedures, all the various things that he will need to have under his belt, but maybe different from what he experienced before and also getting accustomed to the team but the car is different, it's our 2018 car, we've improved quite a lot since '18 but it's the same DNA of the car, the '20 car is a better car but at the end of the day, getting him used to a Renault car, even if it's a two year old car, is beneficial.