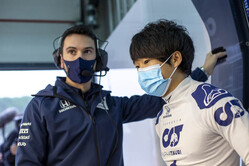 Japanese F2 star, Yuki Tsunoda, who could be inline for the second seat at AlphaTauri has successfully completed his first run in an F1 car.

"Today's session, my first time in a Formula 1 car, was great fun," said the youngster, who is currently third in the F2 championship. "It was a whole different world to the F2 car I am racing this year, especially in terms of the increased power and also the braking performance.

"I didn't worry about my lap times, I just focused on getting used to the F1 car and completing the 300 kilometres," he added, referring to the need to complete the magic number of miles as part of the process of qualifying for his superlicence. "I'm pleased to have managed it.

"I did a lot of physical training to prepare for this, but even so, I was a little bit tired at the end of the day, but very happy with the experience.

"There is so much more a driver has to do in an F1 car, but I had practiced dealing with all the extra switches on the steering wheel in the simulator. 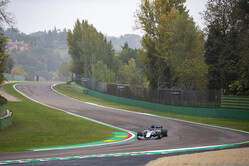 "I have been talking with the Scuderia AlphaTauri engineers since last month when I had the seat fitting. They are a friendly group and we established a good relationship.

"Of course, when it came to discussing the Honda PU, I could talk in Japanese, which made it quite straightforward.

"Overall, the day was great fun and part of that came from having this session at the high speed Imola track, which made it even more interesting.

"Ahead of me are two more F2 rounds, four more races and I will just concentrate on each session over the two weekends and then we can see what the result is at the end of it all."

"We had a very productive first test here in Imola with Yuki and we were able to complete 352km," added team boss, Franz Tost. "It was a bit damp in the morning, so we started the day on full wet tyres.

"Even so, Yuki got immediately familiar with the car, which means that when we changed to the dry tyres he improved his lap times straight away and it was quite impressive.

"After the lunch break we continued on with new sets of tyres and he improved further, showing that he was feeling more comfortable in the car, lap by lap.

"Yuki gave valuable technical feedback regarding the behaviour of the car, which was in line with what we expected. In his last run, he did a race simulation and he was very consistent, which is clear evidence he had everything under control.

"We are looking forward to his next test in Abu Dhabi, when he will be doing the young driver test for Scuderia AlphaTauri."