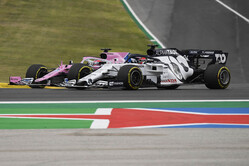 Pierre Gasly: "I really enjoyed this race! It was very entertaining inside the cockpit and I had a lot of fun with the close battles on track. I felt very good with the soft tyres, I was able to manage them well at the start of the race and when the others started to struggle, I could push to pass the Renaults, McLarens and a Racing Point in the end. For us, as a midfield team, it almost tastes like a small victory to finish P5 behind the top three teams, so I'm really pleased with this result. Especially after all the work the guys in the garage have done on Friday night to rebuild a completely new car for me, they put in a lot of effort and I'm really happy to give them this fifth place today."

Daniil Kvyat: "It was a bad race, there wasn't much to do after the first lap as I was already in a bad position. It was quite difficult, something felt wrong with the tyres, like they weren't heated enough, and I just struggled for grip for the first few laps. The wind didn't make the situation any easier but it's normal, these conditions are always very tricky. Sometimes you have good races and sometimes you have bad ones, and today was a bad one for me. We have to analyse it and see what happened on those first few laps with the tyre temperatures and come back stronger next week."

Claudio Balestri (Chief Engineer - Vehicle Performance): "We had a good race today despite some uncertainties we had due to the fact that it was the first time on this track. In the opening lap, the level of grip was low with some drops of rain so Daniil lost some positions. We did our best to recover but in the end, he finished P19. On the other side of the garage, Pierre has shown very good pace on all the different compounds and managed some great overtakes, finishing an amazing P5. As a team we did a good job, we have optimized our car to perform in the best possible way in what was a difficult race as for tyres, fuel and brake management. We now head to Imola, where we hope to continue the momentum and fight for points again."

Franz Tost (Team Principal): "First of all, congratulations to the organizers for this fantastic race here in Portimao. It's the first time Formula 1 held a race here and I must say it's a fantastic venue in a really nice area, Portimao is a nice city and I really hope we'll be able to return in the future. It was also great to see many spectators in the grandstands and there was a very good atmosphere.

"The race start wasn't so successful for us as Pierre ended the first lap in P10, losing a position to Ricciardo, but he then started to recover and was up to fifth position by the middle of the race. During his first stint, the Option tyre worked better than expected, so we extended his stint and pitted him to change tyres from the Option to the Prime on lap 28, meaning we changed his strategy from a two-stop to a one-stop. This was absolutely the right decision because we were able to fit the Prime tyre, and despite the first laps being difficult to get the temperature of the tyres up to working range, he was eventually able to overtake Ricciardo. He then managed to consistently put in fast lap times and caught Perez toward the end of the race, which was a fantastic overtake to finish in P5. He had his race always under control and he overtook many cars, so I think this was one of Pierre's most successful races.

"The team has now scored points in nine consecutive races which is a good record for us, so I would like to congratulate the whole team! We had a difficult weekend, as they had to completely rebuild a new car from Friday to Saturday, due to Pierre's battery catching fire during FP2. The mechanics worked flawlessly, doing a great job. The strategy today was really good, the pitstops were fast, so this fifth place is very well deserved."