"What was he doing?" asks Kvyat 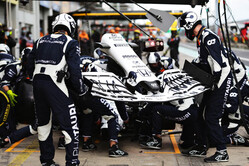 It was an afternoon on which even his keenest supporters, including the world's cat lovers - and their cats - had to admit that Alex Albon's performance was poor.

A massive lock-up into Turn 1 at the start left the youngster with badly flat-spotted tyres and as early as lap 7 he became the first driver to pit for fresh rubber.

Dropping to last place, Albon began to work his way back through the field and by lap 13 was hard on the heels of Daniil Kvyat.

The Russian made a mistake in the final chicane and on rejoining the track had clearly lost momentum, thereby allowing Albon to close in.

The Thai driver made his move and swept by the struggling AlphaTauri, only to misjudge the gap as he pulled back across the track and in the process rip the front wing from Kvyat's car.

Though both were able to continue, the resultant pit stop - and slow in lap - effectively ended Kvyat's hopes of a points finish, while Albon subsequently retired with an engine issue.

"I didn't understand his manoeuvre really," said Kvyat. "What was he doing?

"I think it was quite unprofessional of him and poor judgement," he continued, "so you wouldn't expect that from a driver of his level, who's been racing so long," he said of the youngster who was contesting his 32nd Grand Prix.

"The race was pretty much ruined from then on. I had to do the whole lap very slow with the damaged front wing as a consequence. It went under my floor, damaged my whole floor, the brake cooling, and the race from there was really a struggle because the car was massively down on downforce, and I was just really hoping for rain or something really strange to happen."

Shortly after the clash with Kvyat, Albon was embroiled in another scrap with the other AlphaTauri of Pierre Gasly, the Thai driver subsequently complaining that the 'sister team' were pushing him too hard.

"Obviously Dany ran a bit wide in the chicane and it was a bit of a misjudgement on my side," said Albon, who was penalised for the clash with Kvyat. "I don't really know what happened but we went into the last corner and we touched.

"The pace in the car is good," he added, "so it's annoying to have a result like this now. But to be honest, on my side, I wasn't really too happy with my race, just a few mistakes, and obviously the lock-up compromised us a lot."