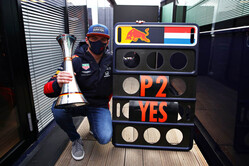 Max Verstappen: "Overall it was a positive weekend and I think we can be very pleased with another second place. I tried to keep as close as possible to Lewis during the race and we just didn't quite have the pace to fight him but overall I was pleased with the performance. We have taken a step forward with the car this weekend, so I am of course happy with that, but we still need to improve and we will keep pushing so we can take the fight to Mercedes every weekend. The Safety Car re-start was not easy with the cold temperatures and the tyres, especially with the others behind having a bit of a temperature advantage after catching up to us, but I managed to keep them behind and pull away again with Lewis. I'm of course also happy with the point for the fastest lap which was an extra bonus. It's also good to see Daniel back on the podium, he is a great driver and he really deserves it."

Alex Albon: "The pace in the car was good today so it's a shame to have a result like this and not see where we could have finished the race. I had a lock-up avoiding contact on the first lap which meant I had to pit really early because I had severe vibrations from a flat spot on the tyre. I don't really know what happened with Daniil and I need to watch it back. I think he may have run a little wide into the chicane when we did the re-start and I guess it was a bit of misjudgment from my side. After that, the Team saw the temperatures rising and I was asked to box and then retire the car. It initially looked like a power unit issue from the data but the Team investigated and found that some debris had pierced the radiator system which led to the rising temperatures. It is definitely not the way I wanted to end the weekend as the car felt good, but onwards and upwards and I'm looking forward to Portimao in a few weeks' time."

Christian Horner, Team Principal: "It is fantastic to see Max on the second step of the podium again with yet another stellar drive and we do seem to be a small step closer in the fight with Mercedes this weekend. Max was able to keep within striking distance of Lewis for the entire race and it all got a little more interesting when the field closed up behind the Safety Car on lap 44. Because the Safety Car was out for so long the tyre temperatures plummeted which Lewis, with the DAS system, was able to handle a little better than we were. Max managed the tricky re-start well and from there it was a pretty straight forward race to the finish for second place. Alex's day was far from simple with a big lock-up into Turn 3 on the opening lap causing us to pit him early as the vibrations took us close to the safety threshold. He was then making good progress back through the field but was incredibly unlucky to pick up some debris, which pierced the radiator, causing his engine temperatures to rise which unfortunately forced us to retire him. Our congratulations also go to Renault, Daniel and Cyril for the podium today and now I think we are all intrigued to see what tattoo Daniel chooses for Cyril!"