Bottas admits that he needs a miracle 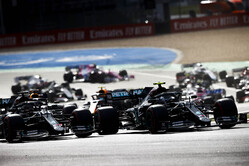 Having grabbed pole twenty-four hours earlier, it was an unusually feisty Bottas 2.0 that fought with teammate Lewis Hamilton on the opening lap of the Eifel Grand Prix.

Unfortunately, a mistake in Turn 1 just 12 laps later allowed the Briton to take the lead, and while Bottas immediately pitted for fresh rubber, just 5 laps later he slowed with a power unit issue

Already 44 points adrift of his teammate heading into the Eifel weekend, Bottas knew he was up against it, however as the gap extends to 69 - effectively 3 Grand Prix wins - the Finn admits that he needs a miracle.

"Obviously, I had the lock up before that but, still, I still had the chance to win, because that made me go into a two-stopper quite early and I think two-stops, in the end, was the best strategy.

"I knew there was still all to play," he continued, "even after that lock up in the drizzle, but then came the engine thing and I couldn't believe it.

"I know the gap to Lewis is now pretty big in the points, so I would definitively need a miracle," he admitted, "but, as always, there's no point in giving up, I have to keep the bar high for me and keep trying. It's just disappointing... that's the best word."

Despite the seemingly impossible task, Bottas insists he will keep fighting.

"I think that's the best mind-set," he said, "there's no point to, like, non-stop calculating the points for Lewis because it's quite a big gap. I just have to set the target for each weekend and then do everything I can for that.

"The mind-set for me to never give up is still with me, so you know, no chance to get out of it.

"Obviously, in a couple of months we'll be a lot wiser about how the season will pan out."

Asked about that first lap scrap with his teammate, he said: "I think Lewis had the first jump from the start, a bit of a better getaway, so that allowed him to get to the inside of Turn 1.

"I knew that the best thing for me would be to brake as late as I could and still try and stay on-track," he continued. "I think he braked really late and then understeered wide.

"I wasn't going to give that position up easy, so I decided to go for it from outside. I'm glad I did get the position back for the second turn inside."

"I had a good start and got up alongside Valtteri and we both like understeered into the corner," said the Briton. "I tried to give as much room as possible and then he was in my blind spot so I didn't know where he was after that.

"I moved wide to the outside, but he came back and he did an amazing job and I remember coming out of that corner thinking: "Good on you, man. I'm impressed. That was good".

"After that I just had to make sure... I tried to hang on to him as far as that was possible. I managed to look after my tyres really well, and I could see he was graining his front tyres and I knew those next couple of laps were the time for me to push and then he had his lock-up."