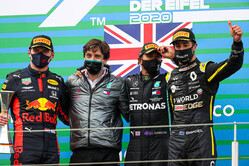 The strategy was influenced by a virtual safety car and then a safety car. At the virtual safety car, around quarter of the way into the race, a number of drivers made their first stops: including the top three finishers. When the safety car came out, several drivers made their second stops: again including the podium finishers. There was then effectively a 10-lap sprint race to the finish, with the frontrunners on soft tyres.

Renault's Daniel Ricciardo finished third, using a similar strategy to the top three. In doing so, he sealed Renault's first podium since 2011.

Just one driver stopped only once: Haas's Romain Grosjean, who moved from the medium to the P Zero White hard tyre on lap 28 and finished ninth from 16th on the grid.

The highest climber was Racing Point's Nico Hulkenberg, who started 20th after being drafted in for qualifying, and finished eighth: having followed the same tyre strategy as the top five (soft-medium-soft).

Temperatures remained cold: just 11 degrees ambient at the end of the race, with 19 degrees of track temperature. This made keeping the tyres in the right temperature window particularly challenging: especially at the safety car re-start.

Mario Isola: "Congratulations to Lewis Hamilton for equalling Michael Schumacher's record of 91 wins, and also Kimi Raikkonen for racking up a new record of grand prix starts. This was an extremely unusual race with the cold weather and lack of running on Friday, All the preparation work was done in one session on Saturday, but although there was no information about tyre wear, it emerged that there was less graining than expected, which prompted some teams to think about stopping only once. In the end, we some saw some light graining on the soft compound, but this did not influence the race outcome. The race strategy was largely influenced by the two safety cars - virtual and real - which were perfectly timed for the frontrunners and gave us all an exciting finale."