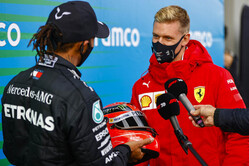 His 91st win came on a day Mercedes suffered its first DNF of the season and Kimi Raikkonen became the sport's most experienced driver.

In the moments after the race, Hamilton was presented with one of Schumacher's own helmets from his final season in F1 with Mercedes by the German legend's son, Mick, who appears set to race for Alfa Romeo next season.

Almost certain to become the sport's winningest driver before the season is done, Lewis Hamilton has already broken most of the existing records and on current form is set to break many more.

"It's definitely not sunk in, that's for sure," admitted Hamilton. "I don't know how it is for other drivers when they have these wins but it takes some time for you to analyse it and for it to sink in, to realise what it actually means.

"Like all of us, I grew up watching Michael win all of those grands prix and I couldn't have fathomed equalling him," he continued. "Getting to Formula 1 was the first step of the dream and obviously emulating Ayrton.

"But Michael was just so far ahead. It's beyond my wildest dreams to think that I'm here today having equalled him and I just feel really humbled by the moment and the opportunity I was given when I was 13 by Mercedes to join this team and I feel really proud to continue to represent them and to have brought this record to Mercedes.

"Hopefully we have got more records to break and to make. Hopefully they know it was a good investment!"

In fact it was Ron Dennis at McLaren who gave Hamilton his big break as a teenager, a mistake the Briton subsequently corrected when asked if one in particular was his favourite.

"I think my first will always be a stand-out moment for me," he said, "because really just... again, I always try to relate it to everyone because I think we can all understand what it's like when you're a kid dreaming to be there and my Dad sacrificed so much to... and my Mum and my step-Mum... sacrificed so much to get me to Formula 1 so to be on top of the podium, I felt like I'd finally reached the top of the mountain. But all the different slides and things and adversity we faced, I just will never forget that moment, looking down at my Dad and to get finally... I've made him proud.

"So I will always remember that moment, and also it solidifies the amazing support and belief that McLaren and Ron and Mercedes had in me from the get-go."

Referring to the Schumacher helmet, he said: "You grow up watching someone and you idolise them, not just in terms of the quality of driver they are but that they are able to continuously do [it] year on year, race on race, week on week, with their team.

"I remember playing as Michael on a game called Grand Prix 2, I think it was. Just seeing his dominance for so long I don't think anyone, and especially me, could imagine that I'd be anywhere near Michael in terms of records. It's going to take me some time to get used to it.

"As I came into the pit lane it was only then that I realised that I had equalled it. I hadn't even computed it. I mean I couldn't have done it without this incredible team, everyone continuing to push behind me and giving it their everything. So a big, big thank you and huge respect to Michael."

Asked of the helmet will have pride of place at home, he said: "Yes, of course. I actually already have one of Michael's helmets. He and I... one of the really, really special moments for me was in Abu Dhabi 2012. I went over to the Mercedes hospitality and met with Michael and we exchanged helmets and that for me was a moment that I will never forget. To stand with someone who I grew up watching on TV and having the honour of exchanging jerseys or helmets, it's what us sportsmen do and it's the highest sign of respect that I can think you can really show.

"So to have the legend of the sport do that with me was really special. But to have his family honour me today, I'm just incredibly humbled.

"His son is such a great bright talent and just a really genuine human being so Michael's obviously raised a great man in him and I look forward to seeing how his career will look moving forwards. Yeah, but now I have two special helmets from Michael in my small living room."