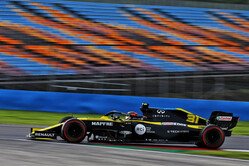 Renault DP World F1 Team faced a challenging Friday practice as Formula 1 made its return to Istanbul Park for the first time in nine years, ahead of this weekend's Turkish Grand Prix.

It was anticipated that today's running would be far from straightforward with the recent resurfacing of the 5.338km circuit matched with Pirelli's harder compound of tyres brought for this weekend's race.

Conditions were slippery in Free Practice 1 with Esteban Ocon tenth on Medium tyres and Daniel Ricciardo eighteenth on Hards as both drivers used the early running to acclimatise to the track and the tricky conditions.

Things did improve for the afternoon session with more rubber bedded into the circuit as the team worked to find some improvements on car set-up to better the grip. Both drivers ended the day brightly with more pace to etch out ahead of tomorrow's qualifying, which starts at 15:00 local time.

It was a challenging day's practice, but the team ended the day on a positive note for the remainder of the weekend.

Daniel Ricciardo: "Overall, I would say it was a challenging day for us. There was just no grip in the session this morning and even as the track rubbered in slightly towards the afternoon, we weren't as quick as we'd hoped. I was not able to feel the grip on such a good circuit, which is a bit frustrating. We found something towards the end of FP2, so we did end today on a positive note and hopefully that sets things up for better pace tomorrow."

Esteban Ocon: "It was a tricky day, but we ended on a positive note. We improved the performance significantly, which is good and that's not an easy thing to do. It was probably the trickiest conditions I've ever driven in as it was really slippery out there. I'd probably compare it to what it feels like driving on Intermediates, only that we were on slick tyres. It was new territory, and this is why we still have stuff to learn. Our long runs seem strong, so let's see tomorrow. The track is awesome, and hopefully with a bit more grip we can push a bit more!"

Ciaron Pilbeam, Chief Race Engineer: "It was a very difficult day to start with as there was low grip on track, particularly with the Hard tyres. The low temperatures, the new track surface and the harder tyres all combined to make it a tricky first session for everybody, even more so for us. We did make a step over the break, however, and it was a bit better in the afternoon with the track rubbering in a little bit. We also made some changes to the car, which helped. We were still quite far off the pace right until the end of the session, when we made some further changes. We spent most of the day quite frustrated but what we did to improve the car throughout both sessions has given us a good direction ahead of tomorrow's qualifying."