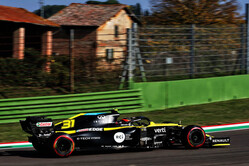 The first official two-day race weekend on the F1 calendar got underway with a sole practice session of 90 minutes. A condensed programme this morning saw Daniel complete 32 and Esteban 44 laps as they ran through race and qualifying preparation. The duo finished the morning strongly, with the sixth and seventh fastest times respectively.

Just two and a half hours later the team went straight into qualifying. Esteban and Daniel opened the session with two runs apiece in Q1. Both ran the Pirelli Soft tyre compound, with Esteban putting in eight laps and a best time of 1min 15.352secs to end the session in seventh. Daniel left the garage slightly later and ran only six laps, finishing eleventh with a 1min 15.474secs.

The second segment of qualifying saw both drivers again use the Soft tyres over two runs. Daniel broke under the 1min 15secs barrier to ease into the final segment of qualifying with a 1min 14.953secs, enough for fifth, however Esteban unfortunately did not progress through. The Frenchman posted a 1min 15.019secs on his first run but did not improve on his second.

Daniel put together an impressive lap in the final qualifying shoot-out. Running on the Soft rubber yet again, the Australian made two runs, bettering his time on the second on new tyres by nine tenths. A 1min 14.520secs put him into fifth, his fourth top five entrance this year.

Daniel Ricciardo: "I'm very happy with today's result. We found speed as the session went on. I'd honestly say it was my best qualifying lap this season. This track is amazing. Qualifying fifth was also super important for track position as we can have a really good battle in the race tomorrow since the group around us is very close. If we make a strong start, then we could have a very solid race."

Esteban Ocon: "I'm disappointed with the qualifying result today; I didn't see it coming, especially as we had a good practice session this morning and we did Q1. It wasn't the best first lap in Q2 and we have to review what happened on the second lap. Still, there is plenty of opportunity tomorrow. We have free tyre choice for the race and we'll see what happens to come back into the points."

Alan Permane, Sporting Director: "A bit of a mixed qualifying today. We are obviously very happy to be starting fifth, and Daniel is similarly pleased! He put in a very strong lap at the end of Q3. Esteban didn't quite get the best of things today; even by his own admittance he could have done a little better. He will however start in a reasonably strong position, right amongst our competitors, and he will have a free tyre choice so all is not lost. He raced very well in Portimao from that sort of position so we're expecting a strong race from both cars."