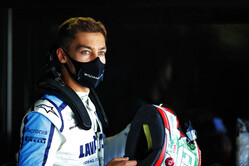 Though there have been a few exceptions to the rule over the years, you can usually spot the true stars long before they even get to step into an F1 car.

Then, when they finally arrive at the 'pinnacle of motorsport', despite the limitations of their equipment, the true stars will invariably show their talent.

Back in 2001, Fernando Alonso did just that in the Minardi, the Spaniard driving the socks off a car that was underperforming, underpowered and underfinanced. For those that could take their eyes off what was going on at the front of the field it was obvious that F1 had a new star in the making.

Ahead of his return to the grid in 2021, Alonso, when asked which of the young guns in F1 most impresses him, cites another driver in a car that, like that Minardi, is clearly not up to the job, George Russell.

"I think there are very talented drivers now in Formula 1," he told Sky Sports. "They all came with very nice preparation as well with driver academies that build the performance and the talent, helping them from a very young age. Now they are doing their job.

"From all of them, George Russell is the one that surprises me every weekend," he admits. "How he's driving the Williams. Zero mistakes. I'm really surprised about his natural speed. So if I have to say one name, Russell for the future is going to be my pick."

The Spaniard's praise comes at a time Russell has secured a third season with Williams as the Mercedes-backed driver waits on a move to a more competitive outfit, much like Alonso who had to bide his time before joining Renault, the team with which he won his two titles and with which he returns to F1 next season.

Told of Alonso's comments, Russell told Sky Sports: "That means a hell of a lot to me coming from a guy like Fernando. I'm looking forward to racing him next year. I'm sure he's going to be flying. I appreciate it."

Russell is one of only two drivers to have out-qualified his teammate at every race this season, the Briton, who won the GP3 championship in 2017 and followed that up with the 2018 F2 championship, has got the Williams into Q2 on no less that 8 occasions this season, though the closes he has got to a points finish was 11th at Mugello.