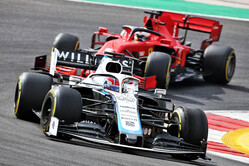 George Russell finished 14th and Nicholas Latifi 18th in the Portuguese Grand Prix. George started the race 14th, with Nicholas lining up 20th, both on the medium compound tyre.

George ran a one-stop race, pitting on lap 36 for the Hard Pirelli tyre. Nicholas stopped once for the hard compound on lap 24 of the race.

Dave Robson, Head of Vehicle Performance: Portimao delivered an interesting race with a range of strategies, some light rain and close racing. Overall our race pace was quite good, and better than in recent races. George was able to complete a good long opening stint on Option tyres and was looking good for a very strong finish. Unfortunately, an issue at the pitstop meant that he faced an unnecessary tussle with GIO and BOT, which cost him a chance of beating Norris and Albon. Nonetheless, he drove well with good pace and sensible aggression.

Nicholas also showed good pace, particularly in the opening stint. He struggled a little more than George to get the Prime working properly in the light rain, but once through that phase he found a good rhythm and enjoyed a tight battle with Magnussen despite the difficult gusty conditions.

Considering there was only one retirement, the fact that we were able to finish 14th - and be frustrated not to finish 12th - on merit is a good result and shows that we are making progress with the car. We have also demonstrated once again that we have a strong team of people who are working very hard and who excel when faced with the uncertainties thrown-up by new race venues and shortened sessions. We have thoroughly enjoyed our time in Portugal and are now looking forward to the challenge of a shortened event in Imola.

George Russell: It was a good race, the car felt great and the pace was strong. I had some massive moments behind Ocon when I was trying to overtake him and Alex (Albon), and another behind Giovinazzi later in the race. It is a shame that every time we have a good result there is not a chaotic race in front of us, and today again there was only one retirement. Points will come, but there are plenty of positives to take away from today, the car was feeling fast and I had some good battles out there.

Nicholas Latifi: It was a tricky race out there today. There was a little bit of rain throughout, the wind was quite gusty, and for our car specifically we really struggle in those conditions. At the beginning of the race we seemed more on pace with our direct competitors, but then it just slipped away lap by lap. After a tough result, you just want to get straight back on track to try and put it right, so hopefully we can improve things for Imola.