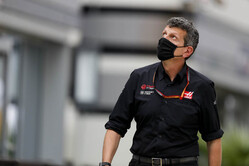 If we could start with you first impressions of this wonderful Algarve circuit. Simon could we start with you please?
Simon Roberts: Yeah, it's a great track. First time I've ever been, so really nice to see. Also we've got a brand new surface, which has made it interesting with the tyres this morning but yeah, it's a proper three-dimensional track and the drivers are really enjoying it.

Guenther Steiner: Yeah I agree with Simon. Everybody seems to be enjoying it and I think also this year going to a few new places or going back to really old places is exciting for Formula 1. I think we spiced it up there and something new is always nice. In general it's a very nice track and I think all the drivers enjoy it.
Frederic Vasseur: Yeah, it was a nice feeling this morning to be back in Portimao - I went there 10 or 12 years ago. But OK with Guenther, on this season we are visiting or re-visiting some nice tracks, like Nurburg two weeks ago or Mugello before and it's always nice for the championship to have new layouts and new tracks. It will be an exciting weekend.

Thanks Fred. Staying with you, how do you fancy your teams chances in Portugal this weekend on the back of what was a strong weekend at the Nurburgring last time out?
FV: Yeah, we made a step forward over the last couple of weekend and we were into the pace in Mugello and Nurburg. I don't know if it's linked to the new tracks or the fact that we are coming to different circuits but the pace this morning was OK, but let's see. It's still a long way to go before the race and we will see during the weekend.

And how impressed have you been by Antonio Giovinazzi's performances in the last couple of races?
FV: Yeah, but he was more consistent than at the beginning of the season and he did a good job. He was a bit unlucky during some events but the last one in Nurburg he did a very strong job but it's important for us to score points because we want to stay in front of Guenther and Haas and it's important to score points with the two cars.

Guenther, Romain Grosjean expressed surprise yesterday that you're changing both drivers for 2021. Was continuity a consideration for you?
GS: I'm surprised that he's still surprised with my decision. I'm always surprised, but he should be used to that. No, I think we just wanted to make a change and we thought it was the right time now because next year it will more difficult because with the new car coming in '22, we don't want new drivers in '22, when a complete new regulation comes in place, with a new car and different tyres and things like this. You want to start with somebody you know. If you had committed to either of them longer than this it would be at least for the next two or three years and at some stage we need change as well and we need to put our focus where we want to be in the mid-term. We are not looking only at the short term. In the short term obviously it would maybe have been best to keep them but now that we signed the Concorde Agreement going forward we need to look a little bit further ahead and see what maybe in three, four years is coming towards us.

How much was the decision to change both drivers driven by financial reasons?
GS: I mean, it is driven by the financial. If you can find a driver that brings sponsors it's fantastic or a driver that costs less. For me, in the moment, we need to invest our finances into the car, as I said, because next year's car will be very similar to this year's because some of the parts are homologated and frozen and we need to focus on '22 and we need to make an investment in the car and we need to use the money as best as we can for the money.

Simon, earlier this year Williams confirmed both of its drivers for 2021. Has the picture changed in recent weeks?
SR: No, nothing has changed. There's lots of speculation and there are lots of good drivers around that are now looking for seats. Dorilton bought the team and nothing changed. I can't say any more than that.

When you say nothing has changed, are you confirming that George Russell and Nicholas Latifi will be with the team in 2021?
SR: I'm not going to say anything about either of our drivers. They are both doing a great job. There's so much speculation around I don't want to inadvertently fuel it. Someone will take some nuance from whatever we say. We're happy. Let's watch the rest of the market.

(Dieter Rencken - Racing Lines) Simon, could you confirm please, that you will honour the contract with both drivers and that they will be with the team next year?
SR: I'm just not going to talk about it. Dorilton bought the team, nothing changed with regards to the drivers and there's some speculation and rumour. It's crazy, it's silly season after all, so yeah, we're not saying any more than that.

(Scott Mitchell - The Race) Simon, I appreciate what you said in the answer there, that you don't want to fuel the speculation but would it not make sense or be possible to extinguish that speculation by ruling out the chance of signing Sergio Perez to replace either driver?
SR: Yeah, possibly, but we just don't want to say anything, one way or the other. We're here to focus on a race weekend. We haven't got any news. Guenther's here, he has got some news. We've got plenty on this morning. We were running lots of part in FP1 and we've got to get through all that and get both our drivers in the best possible place for Saturday and Sunday.

(Lewis Larkham - Crash.net) Guenther, with Haas keen to field an American driver in Formula 1 and you're open to running an all-rookie line-up, would you be interested in Colton Herta and could it be an option for 2021, given his impressive performances in IndyCar? He has also surpassed the revised 30-point minimum requirement for a Super Licence.
GS: I think Colton Herta is doing very well. He's one of the drivers when I watch IndyCar and I'm back in the States, actually. I think he's doing a great job there. I haven't spoken to him so we stop this speculation. We have had to stop speculation lately. But I respect a lot what he does. He's very young, I think he's got a great future but I think he's pretty happy where he is at the moment, and therefore we didn't talk to him. It is also always difficult... I know that he based in Europe before and all that stuff but he's in his second season in IndyCar and he's with a good team there and the investors, I think they want to see him there but I haven't spoken with him, but I have the utmost respect for him, what he's doing there but he will not be in our car next year.

Guenther, Lewis Larkham said in his question there that you're open to running all-rookie team line-up next year. Can you just confirm that is the case?
GS: Yes, yeah, we're open to anything. We're open to anything. I always said that. I'm sorry I didn't respond to that, Tom, but for me it's like we're open to anything and I don't want to go down and say it could be this, it could be that because it was so direct, he asked if Colton Herta is on it, I say no because otherwise speculation starts there but what we are going to do, we will try to announce as soon as possible who our drivers are so we stop this guessing but we are not at that point because we haven't got signed contracts yet so it would be no point to say something, this could be, this should be because then people just... if it doesn't happen, then you have to again explain it, so people just need to be a little bit patient. Hopefully it isn't long, maybe a month or so away, and then everybody gets to know but it's just one of the things, if you do contracts, you are obliged not speak about it.

(Christian Nimmervoll - motorsport.com) Fred and Guenther, I know you're both not going to tell us if Mick Schumacher is going to be in one of your cars, I'm not stupid enough to believe that, but can you tell us a little bit about the strengths and weaknesses you see in Mick because I'm sure you're following his career development. Do you think he has what it takes to be successful in Formula 1?
FV: Yeah, if you have a look at what he did in the junior series, he did pretty well, he won the F3, he's leading the F2 now. Each time he took one year to be at the top of the field but he's doing the job at the end. This is the most important thing, he's about to improve and deliver and now it's a shame that we didn't have the opportunity to FP1 two weeks ago but let's see what happens.

GS: I don't think I can add anything there to Fred because I think he's the expert in these things, he's form...

FV: You can say something.

GS: But the best teams in the feeder series over the last 20 years, I would say, yeah, he's this old so I think Mick, now leading the F2 championship, says it all. I don't think we don't need to say any more than that. He's in his second season in F2, he's leading the championship - I wouldn't say by a good margin - by a nice margin so I think he's doing a good job and I think for sure he's ready for Formula 1.