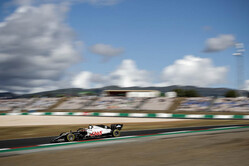 The 12th round of the 2020 FIA Formula 1 World Championship began with practice on Friday at the Autodromo Internacional do Algarve as teams prepared for Sunday's Portuguese Grand Prix.

Two 90-minute sessions - FP1 and FP2 - on the 4.653-kilometer (2.891-mile), 15-turn circuit were held under mostly sunny skies as grip below was at a premium with the Portimao track hosting its first ever Formula 1 race weekend.

Magnussen logged an install lap and a wake-up run in FP1 on the Pirelli P Zero White hard tire before he switched to the softer Yellow medium compound. A fast lap of 1:20.846, set on an eight-lap baseline outing, ultimately placed the Dane 14th on the timesheets. Grosjean ran exclusively on the hard tire throughout FP1. The morning wake-up run produced the Frenchman's fastest time of the session, a 1:21.169 - to place 17th overall. Grosjean followed up with a 10-lap baseline run on a second set of hard rubber before concluding with a high-fuel stint to the checkered.

All 10 teams participated in a blind test of Pirelli's prototype 2021 compounds for the first 30 minutes of FP2 - with Pirelli supplying unmarked tires and a specific run-plan to each team - Grosjean and Magnussen combining for 33 laps on the prototypes. A brief run on Red softs followed but a 15-minute stoppage for the removal of Pierre Gasly's stricken AlphaTauri cost valuable track time. Further precious minutes were lost with a second red flag stop after Max Verstappen and Lance Stroll clashed at turn one. Just eight minutes remained when the track returned to green. Magnussen ended FP2 with a best lap of 1:20.680, Grosjean with a 1:20.867, placing them 16th and 18th respectively.

Romain Grosjean: "I think it's a really cool circuit, there's a lot of up and downs, a lot of blind corners. It makes it hard to learn, if I'm being a hundred percent honest - I didn't do any sim work, so my first laps were this morning. Things went ok, but I think the tarmac is quite new which makes it slippery. It'll get better and better, for sure, especially in the near future - but maybe not for this event. The wind picked up a bit this afternoon. Using the prototype tires at the beginning of FP2 wasn't easy. It was good for Pirelli, but not for our run plan. Then we had a lot of red flags cutting our running short. It's a cool track though and I'm happy we're here. Portugal's a great country and I think people are excited we're here."

Kevin Magnussen: "This place is pretty cool, in a way, but then today there was very low grip - which is kind of a shame, as you go slow. You're running around and the car doesn't feel very good. If it was high grip, this track would be really cool. Anyway, it's been a normal kind of day for us. I struggled a little bit more on race pace, I need to see what's going on there. It went reasonably well on low-fuel, but it's on the high-fuel we need to find the problem. I don't think we have issues that others don't have, everybody's struggled with grip, I think we just have it a little worse. That's what we'll try and work on tonight and see if we can find out why that is."

Guenther Steiner: "It's not been an easy day for us, we don't really know where we're at. We obviously had to test the prototype tires from Pirelli in FP2, that also added to the unknowns from the day. The rest of the afternoon session was just interruption after interruption. It's not been a very conclusive day. We're for sure not where we wanted to be, but at least we've got some laps in. Now we need to look to figure out why we weren't more competitive."