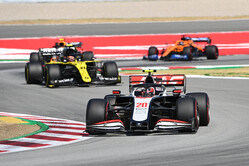 While there has been speculation the two-day format planned for next weekend's race at Imola could cause problems, what with F1 not having raced there since 2006, last week's even at the Nurburgring proved something of a 'dry run'.

Due to there being no running on Friday as the medical helicopter couldn't take off, and F1 not having raced at the German track for several years, certainly since the hybrid formula was introduced, the weekend was reduced to two days.

"That was... I wouldn't say challenging," he continues, "but it was boring, and not well invested time.

"I think we adapted well, and it's more like the old days of racing, " he says of the two-day format, "you have to be a lot quicker in thinking what to do and making bolder decisions, hoping you don't get them wrong.

"You don't have that much time to look at data, you need to go a little bit by the seat of your pants. I think our guys did a good job on that one."

F1 bosses have made no secret of their desire to reduce weekends to two days of running, as this would allow for more races, however, such a move would hurt promoters and those fans who can only attend on Fridays.

"In my own opinion, a two-day event works well," says Steiner. "It allows us to get more races in, which in turn means more fans around the world could get the chance to see us.

"The cons, which I don't know if they're cons, that's for Formula 1 to look into it, its for the promoters, as a Friday gives more possibilities to get fans in. Financially it's a good day for them.

"I don't know all these things as I'm not involved in them, but on the sheer practical side of going racing, I have nothing against two-day events.

"Maybe some events we go to we could put on a Thursday and Friday test - we can make something out like we do with pre-season testing and the broadcasting of that.

"These are just ideas, I don't know if they make sense but maybe we should look into that."