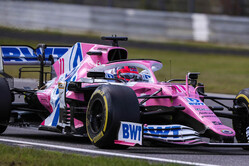 Though his third fourth-place finish of the season consolidates his fifth-place in the standings, Sergio Perez believes it could have been better.

Prior to the deployment of the safety car on lap 43, Perez was closing in on third-placed Daniel Ricciardo, the Mexican, who had pitted on lap 28, on fresher rubber than the Australian who had stopped 12 laps earlier.

At the re-start, Perez challenged the Renault driver who had briefly lost his third position by pitting under the safety car a lap earlier than his Racing Point rival.

"We managed the first stint well, we went really long," said Perez. "I think that made our race again.

"I think without a Safety Car, the podium was going to be ours," he continued. "We were catching Daniel very fast, he was going to struggle at some point with his tyres but then the safety car came.

"It's a great result for the team," he said, "Nico has done a hell of a job, putting some good points for the team on the board. I think the car was performing well and we read very well the conditions today."

Asked why he didn't pit earlier under the safety car, he admitted: "We actually stayed out, but I asked the team again, 'are we sure about this?', because we've done that in a couple of races and it didn't work and here being so cold, it was going to be very difficult restarting the tyres.

"So we boxed and ended up in the same position so I think that was a good call from the team."