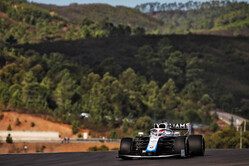 Dave Robson, Head of Vehicle Performance: We've had a good day and although the sessions were a little interrupted, we got through much of our plans and have collected a lot of data. The tyre tests that we did for Pirelli meant that a lot of laps were completed early in FP2, and hopefully this will have helped rubber-in the track.

The circuit has not disappointed and is proving to be an exciting and tricky race venue. We can still expect to see a lot of changes over the next couple of days as the track surface evolves and the teams and drivers understand the compromises that need to be made in order to be quick in Portimao.

With many of the runs compromised today, there will probably be a lot of running in FP3 as everyone finalises their set-up for qualifying and the race. We still have a lot of work to do, but we have made a good start and have a good baseline to build on.

George Russell: It was a relatively productive day considering how many red flags there were. The track rubbered in incredibly quickly, those opening 20 minutes were really tricky, but then the grip levels felt really strong towards the end. I was really happy with my lap on the medium tyre which we ended P11. All in all, not a bad day.

Looking further into the weekend I think we are going to be fighting with Haas and the Alfas again. As FP2 was thrown out of the window due to the red flags there are still a lot of unknows as none of us got any high fuel, long running.

Nicholas Latifi: It was a really fun track to drive, it is always nice to come to circuits that you don't have much experience on and discover them. FP1 was tricky, there was very poor grip out there which I am sure was the same for everyone. I really struggled to get a good consistent feel for the balance of the car. It was probably one of the most difficult sessions I have driven in all year. FP2 was very busy with everyone doing the Pirelli tyre testing in the opening laps and the second half was quite disrupted with red flags. We definitely have some work to do tonight, and a lot of data to go through and analyse.