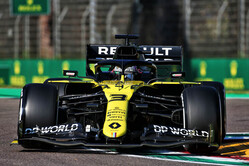 Renault has joined Ferrari in saying that it is against a freeze on engine development from 2022.

The French team's opposition to the freeze comes at a time Red Bull is calling for the freeze should it purchase Honda's IP in order to run the Japanese manufacturers power units in its two teams.

Having gone to the expense of buying Honda's programme, Red Bull is concerned at the extra expense that would be incurred should development of the engines be allowed.

Mercedes has said that it would back the freeze, though many believe that the German outfit's motive is more about preserving its own dominance rather than any altruistic concerns for its Austrian rival.

"If you had asked me six months ago, we would have pushed hard for an even lower cap budget, to try to contain the costs of the chassis, but also to reduce those related to the engine by accepting a freeze," said Renault boss, Cyril Abiteboul. "But Red Bull Racing and Honda were against it and we accepted it.

"So we continued on a different path," he continued. "Since then, we have been very busy working on the 2022 engine platform and, if you ask me today what I think about freezing the engines, my position is clearly different from the one I had six months ago. I am against freezing the engines. We have no intention to stop what could be a very important platform for us. We do not accept it."

Like Ferrari, Renault's position is understandable, for, ignoring the previous stance of Red Bull and Honda, the French and Italian manufacturers know that the only means of closing the gap to Mercedes - which has won almost 75% of the races held since the hybrid formula was introduced in 2014, and shows no sign of easing - is to be allowed to develop their engines.

"We are firmly against freezing power units as it is against the spirit of F1," Ferrari CEO, Louis Camilleri told Gazzetta dello Sport earlier this week. "I think it is important to emphasise that the current rules already provide for freezing in 2023.

"Plus, F1 has ambitious goals in terms of sustainability," he continued. "Already from 2022, the regulations provide for the introduction of a fuel with a 10% ethanol content, but the FIA wants to reach 100 per cent as soon as possible, ideally the following year. This inevitably involves the development of some engine components. It is a very complicated subject, and we are actively talking about it with all the parties involved."

"We have to talk to find a solution for the engines of the future in the medium to long term, also from the point of view of the sustainability of the new power units," agrees Abiteboul. "We are in favour of talking about medium to long term plans for the engines of the future, but certainly not about freezing the power units."

"Ultimately this is where self-interest comes into play," Christian Horner told reporters as the Imola weekend got underway, the Red Bull boss seeking the intervention of the FIA, failing which, should a freeze not be agreed his team (and AlphaTauri) could leave the sport.

"The job of the regulator and the commercial rights owner has to look at the broader picture of what is right for F1," he continued.

"We've obviously lost a manufacturer in Honda, which is disastrous news for the sport. And for Red Bull to take on that engine project, we just can't comprehend (the costs), obviously thinking about open development, particularly in the world that it currently is at.

"I think the FIA and the commercial rights holder, they're having constructive discussions. Obviously that needs to take place hand-in-hand with the OEMs that have an involvement in the sport.

"I believe that that is what will happen, and obviously some form of solution needs to be found in the coming weeks."