Perez turns up the pressure on Red Bull 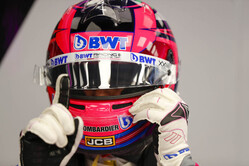 Thought to be in line for a seat alongside Max Verstappen, Sergio Perez warns Red Bull that he cannot wait too long for a decision.

No matter how tenuous, today saw two further doors closed on Sergio Perez - and those other drivers seeking 2021 berths - as Alfa Romeo and Williams confirmed unchanged line-ups for next season.

While both seats at Haas are supposedly up for grabs, and even the seat alongside Pierre Gasly at AlphaTauri, the star prize is that at Red Bull as teammate to Max Verstappen.

Current incumbent, Alex Albon has essentially been told by Christian Horner and Helmut Marko that the seat is his to lose, however any further repeats of the Thai driver's Portimao struggles and lose it he surely will.

Unsurprisingly, especially after Horner admitted that his team is willing to look outside its driver pool, there are no end of hopefuls looking in through the windows, not least Nico Hulkenberg and Sergio Perez.

Speaking to reporters at Imola today, though keen to get the drive, the Mexican made clear that he cannot wait too long on a decision.

"There is a time where you take the risk, wait, and then see what happens," he said. "The season is coming to an end so I think it's important for teams to know what's going on, what's happening going forward and for drivers too.

"I'm looking at all my possible options and I cannot take too long anymore," he added.

"I think at the moment until they're not confirmed then they're an option," he said of Red Bull.

"Same as every team that hasn't confirmed, as time is running out, there are very few opportunities to remain on the grid for next year."