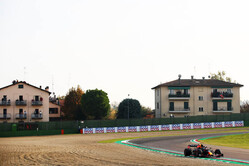 Max Verstappen: "It was a bit of a messy qualifying in the end and the issue we had in Q2 took the rhythm out of the session. Normally throughout qualifying you know exactly where you still have time to gain and you can build up but I never really got into that because I had to nail one lap on the mediums in Q2. Then after that, going into the first bit of Q3, still not having a perfect reference on the soft tyres made it all a bit more tricky. I think P3 was the maximum we could have done anyway and I didn't expect to beat Mercedes but I would have liked to have been a bit closer, which I think was possible if we had a cleaner qualifying. After the session I said a big well done to the mechanics because it was impressive again to get my car back out in Q2. They always try their best even if it looks impossible and we should be very proud of that. The track is really cool and it's enjoyable to drive. I initially thought it was going to be too narrow for these cars but it's fine so let's hope we can have a good race tomorrow."

Alex Albon: "It's very tight out there and just one tenth would have put me fourth. Overall, it was not a bad qualifying and we can have a good race from sixth. The session started off quite difficult but then it just got better and better. I got track limits with my first Q3 lap so that was deleted and with the final Q3 lap there's always a bit of a risk versus reward factor so I think if I had a lap time already on the board I would have risked and pushed harder, but the time was not too far off in the end. I think with the narrow track and tyre degradation, overtaking could be quite tricky in the race tomorrow but it's a new circuit and no one really knows how it's going to play out, which is kind of exciting, so let's see."

Christian Horner, Team Principal: "Third on the grid for Max today was thanks to some incredible teamwork by the mechanics who managed to repair the electrical issue on car 33 in record time. Max was able to get back out on track in time to post a lap in Q2 but of course this had an effect on his preparation for Q3. Third was probably still the optimum today and qualifying on the medium compound gives us options for tomorrow's race. For Alex, having lost a few laps due to track limits, he had to make that last Q3 lap count and he did a solid job to line up on the third row of the grid with the sixth fastest time. Having set his best Q2 time on the soft tyre, Alex starts tomorrow's race on a different tyre to Max which means we'll have alternative strategies across both cars, which hopefully works to our advantage."