Ricciardo was smiling as Perez pitted 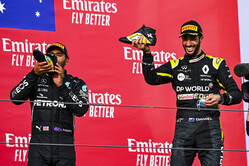 Already delighted to be assured of a decent points haul following the disappointment of Portugal, the Australian couldn't believe his luck, when, under the safety car that followed Verstappen's retirement, Sergio Perez pitted for fresh rubber.

"Two in three races, it's pretty crazy," grinned the Australian at race end, as he re-introduced F1 (and Lewis Hamilton) to the shoey.

"Obviously we were pretty settled in fifth, that was our pace today," he admitted. "Leclerc hung with me, but I felt like I was quick enough to kind of manage that gap to him.

"But Perez was quicker," he continued, "he was the fourth best car today. But then obviously Max had the issue, and Perez pitted under the safety car. I was quite surprised with that.

"I was smiling about it," he admitted, "because I was like, 'well that's giving me third on track'. I knew hanging on with the hard on the restart was going to be tricky, but I was more than happy to fight for it at the end, and track position is obviously very important around here.

"Both myself and the team were very willing to keep me out on track. Obviously I wanted to go out fighting at the end, and if he came back through and passed us, so be it, that was the position we were in. So I felt it was definitely worth the risk, and it paid off."

However, the Australian admits surprise that Kvyat, who pitted along with Perez and passed the Mexican at the restart, was soon filling his mirrors.

"The threat at the end was Kvyat was very surprising," he said. "I wasn't sure where he came from, but I was told he was on softs, and he was coming on obviously very strong.

"But I held on, and I'm just very, very, very happy. It's pretty surreal actually, obviously the first podium, and to get two now in such proximity, it's awesome."