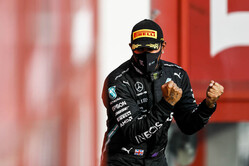 Mercedes driver Lewis Hamilton took a step closer to a seventh world title by winning the Emilia Romagna Grand Prix using a two-stop strategy. Mercedes clinched the 2020 constructors' title with a double podium, after Valtteri Bottas finished second: mathematically the only man who can now deprive Hamilton of the title. Both drivers ran all three compounds after a late safety car.

Hamilton's win was secured thanks to an overcut strategy, where he completed a longer first stint than his direct rivals on the P Zero Yellow medium tyre, while pumping in some fast laps before his pit stop. He made his first stop onto P Zero White hard tyres under a virtual safety car, which helped him to pit without losing the lead.

During a final safety car period with 10 laps to go, the majority of drivers pitted once more, including Hamilton and Bottas, who went onto the P Zero Red Soft tyre for the final stint.

Most drivers selected a one-stop strategy, which then become a two-stopper as a result of the safety car. The highest-placed driver to start on the soft tyre was Renault's Daniel Ricciardo, on the podium in third.

The weather remained temperate throughout the race, starting in 21 degrees centigrade ambient, with 24 degrees of track temperature.

Mario Isola: "The safety car late in the race influenced the strategy heavily: up until then it was looking like one stop for the majority of drivers; also because there is a big pit stop time loss at Imola. Due to some graining seen on the soft, the previously envisaged strategies involving the soft then largely changed in favour of a medium to hard strategy. The medium tyre was chosen by the top two to start the race on, and showed minimal degradation even over very long stints. The hard tyre was also run by many drivers in excess of 40 laps. Obviously we need to look at the medium tyre that had completed 32 laps with Red Bull's Max Verstappen to understand exactly what happened; it seems that some debris on the track could have caused a puncture. Congratulations to Mercedes for clinching their record seventh consecutive manufacturers' championship: once more after an intensely strategic race, where Hamilton was able to take perfect advantage of the virtual safety car."