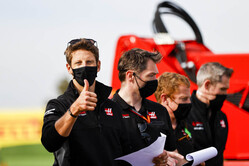 In the latest statement on testing for the coronavirus, F1 and the FIA reveal that 9 people have returned positive results.

Of those 64,779 tests a total of 55 have returned positive results.

While the first twelve weeks of testing saw just 8 return positive, in recent weeks the average has been around 8 a week.

This week, between Friday 23rd and Thursday 29th October, 4281 tests for COVID-19 have been performed on drivers, teams and personnel and of these, 9 people tested positive.

As ever, the FIA and Formula 1 provide this information for the purposes of competition integrity and transparency, though no specific details as to teams or individuals will be made public.

Today, Racing Point team boss, Otmar Szafnauer, revealed that his team have has seven positive cases of the virus this season.

Sergio Perez missed the two Silverstone events, while Lance Stroll sat out the Eifel Grand Prix at the Nurburgring.

"Two drivers and a team owner and a handful of other people that were tested at the factory and that's it, so in total I think we're seven," Szafnauer told reporters.

"We don't name people, as to who tested positive, and we don't name their roles either," he added.

However, Perez has revealed that two of those crew members who tested positive worked on his car and missed the Nurburgring event.

This weekend's event at Imola was originally due to allow spectators, however a late move by the authorities in Italy means the event will take place behind closed doors.

With Bahrain yet to confirm whether it will allow spectators, it is likely that next year's Australian Grand Prix will be the next event to (hopefully) witness fans in the stands.