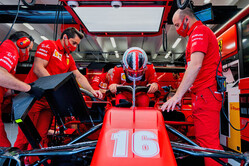 While team boss, Mattia Binotto has played down improvements in recent races as the team introduced more updates, Matteo Togninalli, Ferrari's chief race engineer is confident that the ever "evolving" SF1000 will suit Imola, the scene of this weekend's Emilia Romagna Grand Prix.

"This track is very technical," he admits, "with a reasonably high average speed. The weather should be pretty good, with temperatures in the 18 -20 degrees C range.

"Based on what we have seen in recent races, I think our package could suit this track well and that we will be able to get the most out of the car. As usual, the drivers play a key role."

Asked if there will be further upgrades, the Italian was giving little away.

"Apart from the introduction of updates, seeking greater performance is an ongoing task," he says, "even if there are no visible elements, the car is always evolving. In the final part of this season that work is also aimed at 2021, with new solutions to try."

For the first time in the history of Formula 1, a Grand Prix will intentionally be run over just two days.

"The difficult circumstances this year have thrown up new challenges and everyone involved in the sport has shown flexibility and the ability to adapt and the Imola weekend format is an example of that," says Togninalli. "With back-to-back races at European circuits over 2000 kilometres apart, the teams need the extra time to get the transporters from Algarve to Imola and have time to set everything up at the Italian venue, hence the lack of track activity on Friday.

"It is also true that another future goal of having 2-day race weekends is to reduce general costs, making this weekend an interesting experiment," he adds.

"It's happened in the past that a day has been lost, as was the case at the Eifel Grand Prix three weeks ago, or in Japan last year, but that's always been down to force majeure. In this case however, everything has been planned and organised in advance.

"With very little time available to analyse the data from free practice, we have reorganised our priorities, allocating resources in a different way both at the track and back in Maranello.

"We will also manage components, engines and gearboxes for example or the incorporation of components that have already been tested, so as to cut down time spent and to try and reduce the risks as much as possible."

Then there's the fact that F1 has not raced at Imola since 2006.

"This is indeed an additional and significant variable," he admits. "It means that preparation prior to the event is even more important to try and perform as well as possible: that goes for the car, the drivers, the team and the tyres, everything in fact that goes into the entire package.

"Without any data to work from, as is the case with Imola, the level of fine tuning is reduced and one has to look at the bigger picture.

"Clearly, the simulator helps, especially to allow the driver to quickly familiarise himself with the track, not just its layout, but also other features that can impact performance, such as bumpy sections, where to ride the kerbs, the right lines and braking points.

"It's true the drivers learn a new track incredibly quickly and are soon on the limit, but it's also true that when you go to a new track, the lap times tumble much more quickly than usual. It's important therefore to do as many laps as possible to get to the optimum level as soon as possible."

Asked if this scenario favours or disadvantages Ferrari, he replies: "I think we have shown during this very strange season that we are able to adapt quickly to unusual situations, to react to the unexpected and our level of preparation is very good. Overall, I'd tend to think it could be an advantage."