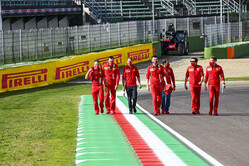 Ahead of this weekend's Emilia Romagna Grand Prix, race director, Michael Masi has warned drivers that they will be penalised for exceeding the track limits at two corners.

Following last week's fun and games at Portimao, where Masi had to slightly ease the rules after there were over 120 transgressions of the track limits rules on Friday alone, the FIA's race director has warned drivers that his stewards will be watching them at two of Imola's iconic corners this weekend.

A lap time achieved during any practice session or the race by leaving the track on the exit of Turn 9 (Piratella) or Turn 15 (Variante Alta), will result in that lap time being invalidated.

"A driver will be judged to have left the track if no part of the car remains in contact with the track," adds Masi, who warns that "each time any car fails to negotiate Turn 9 exit or Turn 15 exit by using the track, teams will be informed via the official messaging system.

"On the third occasion of a driver failing to negotiate Turn 1 Exit and/or Turn 15 Exit by using the track during the race, he will be shown a black and white flag, any further cutting will then be reported to the stewards. For the avoidance of doubt this means a total of three occasions combined not three at each corner."

Despite the easing of the limits in Portugal the transgressions continued throughout Saturday and again in the race, with Lance Stroll and Romain Grosjean both going on to receive time penalties for repeatedly flouting the rule.