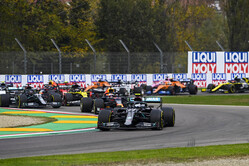 Amidst all the doom and gloom, we'd like to get November off to a good start by putting a smile on your face.

Sit back, close your eyes, and try to imagine the groans of frustration, the face-palming yesterday afternoon at F1 Towers and among the Sky F1 crew, when Lewis Hamilton predicted that today's race would be "boring".

Of course, despite never having raced here in F1, he's right, for unless the Weather Gods make an unscripted entrance, today's race will be decided at the first corner... well, the second actually, the infamous Tamburello. After that we can only hope for some epic bravery, be it the need to boost their team in the constructor standings or impress a would-be employer.

Having taken pole it is up to Valtteri to ensure that he maintains the advantage, though on previous form that seems unlikely. Lewis is currently on full-on, take no prisoners mode and it will take something special from the Finn to prevent the world champion extending an already daunting lead today.

As the Black Arrows fight it out, Max will be hoping to spoil the party, but despite the early promise yesterday, it appears that once again the Red Bull-Honda will be no match for the Three Pointed Star.

Though the battle between the two Mercedes - and hopefully the Red Bull - should be epic, if only for the opening moments, the scrap behind is likely to be where the real action is.

Even if the track isn't conducive to overtaking, there is always tyre strategy and big balls overtakes, not to mention the fact that, as in Portugal, track limits are certain to play a part.

We have Monza winner Pierre starting from fourth, ahead of Daniel, Alex, Charles, Daniil, Lando, Carlos, Sergio and Esteban, surely - despite the race being held behind closed doors - that's worth the price of admission alone.

According to Pirelli there's a gap of around 0.5 seconds between hard and medium, and 0.6 seconds between the medium and the soft. Of the Top Ten, the Mercedes and Verstappen are the only drivers starting on mediums.

In terms of strategy, a one-stopper looks set to be fastest. The optimal one-stop strategy uses the medium and soft tyres: softs for 28 to 30 laps and mediums for 33 to 35 laps (either way round). Very close to that is a soft to hard strategy: softs for 24 to 27 laps and hards for 36 to 39 laps (or vice versa).

Next quickest is mediums for 26 to 35 laps and hards for 28 to 37 laps, this strategy having the advantage of featuring a wider pit stop window.

A two-stop strategy is slower, but the best one is with two stints on softs of 18 laps, plus one stint on mediums of 27 laps.

While Lewis cannot wrap-up the title today, Mercedes can, indeed with a 209 point advantage securing that seventh successive crown is merely a formality.

Sadly, there is nothing to suggest that the steamroller won't continue next season also.

On the grid, with 20 minutes before the start, there appears to be an issue with Gasly's AlphaTauri. It is understood to be power unit related but fixable.

There's work going on on Lewis' car also, where there appears to be a problem with his seat.

Air temperature is 17.8 degrees C, while the track temperature is 24.2 degrees. It is bright but there is a lot of cloud. However, race control insists there is 0% chance of rain.

They head off on the warm-up lap.

"Keep up that rhythm from yesterday," Ricciardo is told. "Let's go!" he replies.

The grid forms. Bottas' car pointed in towards his teammate and Tamburello.

They're away! Bottas and Hamilton both get away well, as do Verstappen and Gasly. However, on the run to Tamburello the AlphaTauri loses ground behind Hamilton who is passed by Verstappen as the Mercedes driver loses momentum. Indeed, Ricciardo also has a very close look at the world champion.

Hamilton holds off the Renault at Tamburello while Leclerc has already passed Albon.

Magnussen subsequently spins at Tosa after tangling with Vettel.

Stroll pits to replace his front wing after clouting Ocon at Tamburello. He rejoins in last position behind Magnussen.

As Verstappen maintains a 1s gap to the leader, Hamilton is all over the rear of the Red Bull. Ricciardo has already lost 3.4s to Hamilton.

After just 4 laps we are already seeing drivers having their lap times deleted, among them Norris.

"It's hard to follow here," reports Hamilton as he remains 1.081s down Verstappen.

Sainz makes a move on Norris at Tamburello to take ninth, the Spaniard taking advantage of the solitary DRS zone.

A piece of debris by the side of the track - a large piece of Stroll's front wing assembly - has now been removed.

As Leclerc drops 2s behind Gasly, Albon is all over the rear of the Ferrari.

At the end of lap 8, Gasly is told that his race is over and that he must pit to retire the car.

Grosjean pits at the end of lap 9, as Verstappen is told that he is quickest in all corners... but losing time on the straights.

As Ricciardo falls 10.5s behind Hamilton the field is pretty evenly spread out as the inevitable issue with cars being unable to follow too closely becomes all too apparent, again.

As Giovinazzi pits at the end of lap 10, Raikkonen is all over the rear of Vettel as they battle for 13th.

As Hamilton reports that his front-right doesn't feel great, Leclerc, Norris and Ocon all pit. While the Ferrari driver switches to hards, the others opt for mediums.

At the end of lap 14, Ricciardo, Albon and Kvyat pit.

Ricciardo rejoins ahead of Leclerc, while Albon is stuck behind the Ferrari.

The Monegasque does well not to run into the rear of Ricciardo as they both struggle with their cold tyres.