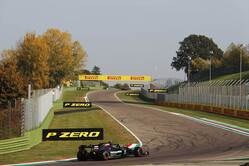 Calculating the tyre gap and optimal race strategies for the 63-lap Emilia-Romagna Grand Prix hasn't been easy, as the teams don't have previous experience of the track and there was only one (90-minute) free practice session this morning. This free practice session was also held from 10:00-11:30, which means that it won't be completely representative of the warmer afternoon conditions for the race.

In terms of strategy, a one-stopper looks set to be fastest. The optimal one-stop strategy uses the medium and soft tyres: soft for 28 to 30 laps and medium for 33 to 35 laps (either way round). Very close to that is a soft to hard strategy: soft for 24 to 27 laps and hard for 36 to 39 laps (or vice versa).

Third-quickest is medium for 26 to 35 laps and hard for 28 to 37 laps. This strategy has the advantage of featuring a wider pit stop window.

A two-stop strategy is slower, but the best one is with two stints on soft of 18 laps, plus one stint on medium of 27 laps.

Both Mercedes cars as well as the Red Bull of Max Verstappen set their best Q2 times on the medium tyre, and will consequently start the race on this compound.

Qualifying began with 23 degrees ambient and nearly 30 degrees of track temperature. Similar conditions are expected for the race but none of the drivers have completed long runs in representative conditions.

With a comparative lack of pre-race data from the single practice session, initial information suggests that the overall race time between a one-stop and two-stop strategy could be reasonably close. As a result, we're likely to see both one-stoppers as well as two-stoppers tomorrow, as teams try to gain a tactical advantage from doing something different.

With only one day of running prior to the race and only few support events, the track was very 'green' initially. There was plenty of evolution today and a similar trend is expected tomorrow.

Mario Isola: "The teams were able to capture most of the tyre data they needed from the single 90-minute practice session, sometimes by splitting the tyre assessment programmes over their two cars. There is still considerably less tyre data than there would be from a 'conventional' weekend, which leaves some question marks over strategy heading into the race and opens up some more options tomorrow, especially with the track evolving all the time. The teams will have a busier Saturday evening than usual analysing the performance gaps between the tyres, and working out how this can translate into an optimal race strategy. As for the tyres, we had a little bit of graining during the early part of the day, but the situation improved as expected with more running. All three compounds look set to play an important role in the race and we are satisfied with their performance."