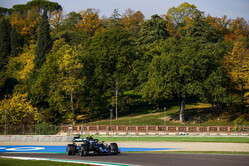 While Lewis Hamilton finished this morning's practice session in his customary place atop the timesheets, for much of the session it was Max Verstappen who occupied that most coveted position.

As ever, it's early days, but Mercedes really does appear to have a fight on its hands this weekend.

As was the case in Portugal, there is a question mark over the soft tyres, with the mediums appearing to have better pace, though it remains to be seen if that will continue.

Adding to the conundrum is that fact that Verstappen has yet to try the mediums, opting to run just the hard and soft earlier.

Valtteri Bottas was third quickest, while newly re-signed Pierre Gasly was fourth in the AlphaTauri.

It was a good morning for the Faenza-based outfit which saw both of its cars in the Top Eight, Daniil Kvyat out-pacing under-pressure Alex Albon.

As has been the case at recent races Charles Leclerc dug deep, while the Renaults of Daniel Ricciardo and Esteban Ocon were sixth and seventh.

Again, like Portugal, track limits are proving to be an issue, with countless times deleted this morning, also, certainly in Q1, traffic is likely to be a problem.

Talking of track limits, while the stewards were cracking down on drivers exceeding the limits at Turns 9 and 15, over the lunch break Turn 13 has been added to the list.

However, Michael Masi has relaxed the rules in terms of the fact that the clause stating that drivers "will be judged to have left the track if no part of the car remains in contact with the track" has been scrapped, albeit in Turn 15 only.

This morning's session saw no less than 80 times deleted.

Ahead of Q1, the air temperature is 19 degrees C, while the track temperature has risen to 26 degrees. It remains bright and sunny.

Magnussen is first out, the Dane going on to post the first time of the afternoon, a 17.186.

Latifi posts 17.830 to go second, the red softs very much the order of the day.

A 16.227 sees Perez go fourth as Verstappen and the Mercedes pair head out.

Verstappen can only manage second (15.473), while Hamilton subsequently posts a 15.144 and Bottas a 19.034 after backing off in S3 when he encountered a slow Perez.

As was the case last week, the softs are clearly good enough for more than one flying lap.

Hamilton retakes the top spot with a 14.574, as Gasly reports that his steering is "bent".

With 8:10 remaining, Ricciardo is the last to head out.

With under 4 minutes remaining, Hamilton is one of the first to head our for the final assault.

With 00:36 remaining, Ricciardo starts his final flying lap. He is currently 19th.

Q2 gets underway, and unusually within moments there are cars on track.

The Ferrari pair are on mediums, as are the Mercedes and Bulls.

Vettel gets proceedings underway with a 16.302 but this is soon beaten by Kvyat and then Gasly, as Verstappen complains of "no power".

A 15.552 sees Russell go third, as Verstappen continues to complain that he has no power.

The Red Bull's engine cover is quickly removed, which is never a good sign.

Gasly goes third, ahead of Ricciardo, Norris, Kvyat and Ocon.

With 07:10 remaining, both Red Bulls are in the drop zone, along with Stroll, Russell and Vettel.

Having flat-spotted his front-left, Albon has to switch to the softs. Meanwhile work continues on Verstappen's car which has encountered an electrical issue.

Vettel runs wide at the Variante Alta and helpfully dumps a load of gravel on the track on his return.

Ocon is among the first out for the final run. He is joined by Gasly, Kvyat and the Ferraris.

With 3:05 remaining, Verstappen's engine fires up and he heads out, the team having detected an issue with a spark plug.

Verstappen begins his all-important flying lap, the Dutchman still on the mediums.

Moments later he is leapfrogged by his teammate, who is on the softs.

To add insult to injury, Vettel's final time is deleted, dropping the German to 14th behind Russell.

Going into Q3, both AlphaTauris are still in there, along with two McLarens, one Ferrari, one Renault, two Bulls and two Mercedes.