Hamilton quickest in Imola practice, but Verstappen is up there 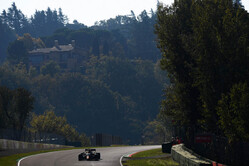 Ahead of the weekend's sole practice session, the air temperature is 15.5 degrees C, while the track temperature is 16.9 degrees. It is somewhat cool, but bright and sunny.

While we have seen 5 seats on the 2021 grid filled this week, there remain vacancies at AlphaTauri, Haas and possibly Red Bull.

The seat is Alex Albon's insists Christian Horner, but the youngster must prove he is up to it.

Following his weak performance in Portugal, Albon really needs to seriously raise his game this weekend... and what better location.

That said, Hamilton has yet to agree a deal with Mercedes.

With just the one practice session, and less than three hours until qualifying, it is absolutely vital that there are no mistakes over the next ninety minutes.

Raikkonen, by the way, is the only driver on the 2020 grid to have raced an F1 car here before.

As more drivers head out, hards appear to be the order of the day, except for Latifi who is on mediums. Kvyat also.

Some early argy-bargy involving Stroll and Grosjean, two drivers known for their ability to hold it all together under pressure.

Albon is warned of "sausages at the Turn 14 apex".

Unsurprisingly, it's a hive of activity and just six minutes in there are 17 names on the board.

Russell heads out, meaning that all 20 drivers are now on track.

As was the case in Portugal, drivers are already having their times deleted, Turns 9 and 15 being the corners the stewards are cracking down on.

Hamilton is among those to have a time deleted.

Verstappen posts a 17.047, as Sainz goes second ahead of Leclerc, Albon, Gasly and Hamilton.

Kvyat goes cross-country, the Russian taking a trip through the gravel at Turn 2 (Tamburello)

With so many drivers on track there are understandable issues with traffic.

Albon is warned that his last two times have been deleted after running wide at the exit of Turn 15 (Variante Alta).

"What the f*** is Magnussen doing," enquires Stroll.

Despite his various issues with oversteer and the kerbs, Albon goes third with a 17.102 - only to have his time deleted.

The guy has to stop complaining about the kerbs and get on with it as they're the same for everyone.

On the mediums, Bottas goes second with a 16.913, albeit over a second off Verstappen's pace. Moments later his time is deleted for exceeding the limits at Turn 9.

Elsewhere, Raikkonen is the first driver to switch to softs.

Next time around, Bottas goes top with a 15.783... in the Mercedes garage Toto Wolff holds his breath in case the time is deleted. It isn't.

"I don't know why they have track limits, the kerbs are enough," says Albon.

"last two corners there's no balance," reports Grosjean, "I don't know what to do." "Try left-hand toggle," he is advised.

Vettel is the latest to have his time deleted as Perez goes fifth with a 16.943.

Unhappy with his softs, Leclerc pits and changes to another set of the red-banded tyres.

A 16.417 sees Ocon go third on the mediums as Verstappen bolts on a set of the softs.

Sainz takes a long trip through the gravel at Turn 18 (Rivazza).

On the softs Verstappen posts 15.338, while Hamilton closes to within 0.008s on the mediums.

For most, the mediums remain the order of the day.

Hamilton and Verstappen continue to trade fastest sectors, however the Dutchman makes a very late decision to pit.

"In the faster corners they give up a bit," says Verstappen of the softs. Shades of Portimao where, for some drivers, the mediums had more pace than the softs.

Happier with his latest set of softs, Leclerc goes fourth (16.208), as Vettel heads out again.

Bottas is the first of the Mercedes pair to try the softs, aborting his first flying lap following a mistake in S3 after only posting PBs in the first two sectors.

Bottas goes quickest in S3 but fails to improve his overall time.

Vettel switches back to the hards as Magnussen takes a rough ride over th kerbs at the Variante Alta.

Hamilton switches to softs as Bottas goes top with a 15.218. However, moments later, Verstappen ups the ante with a 15.023.

PBs in the final two sectors see Hamilton go second with a 15.212 as Verstappen continues to rule the roost.

More argy-bargy involving a Haas driver, this time it's Magnussen and Norris.

Currently 20th, Vettel has his latest team deleted, albeit for running wide in Turn 10.

"I'm not going to say anything but I'm boxing," says Verstappen as he pulls up at his garage slot.