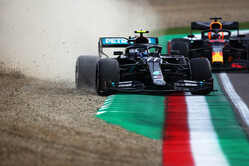 Valtteri Bottas admits that he was unable to avoid the debris that compromised his Emilia Romagna Grand Prix.

Holding off teammate Lewis Hamilton at the start, Bottas was settling into his opening stint of the Emilia Romagna Grand Prix, when, on the second lap, he ran over a piece of debris. It was a sizable piece of endplate from the front wing of Sebastian Vettel's Ferrari after the German had clashed with Kevin Magnussen on the opening lap.

"The start was good," said the Finn. "That was one of the main things to get right today. But on lap 2, suddenly, out of Turn 7, there was debris. I didn't have time to avoid it...

"I saw it," he continued. "I aimed in the middle of the car, at least I tried to not run over that with the tyres but obviously it caused some damage or something that made the car quick difficult to drive."

Indeed, as the race developed, the Finn was warned by his team that there was significant damage to the floor of his car.

Overcut by his teammate during the pit stops, a series of lock-ups related to the damage left him vulnerable to Max Verstappen's subsequent attack.

"I was really pushing hard to try and avoid Max getting through," said the Finn. "I had to push over all my limits and that led to a mistake, so I was unlucky."

Verstappen subsequently suffered a tyre failure and pitting under the safety car Mercedes was able to remove the offending bit of debris from the car.

However, by then it was already too late to mount a challenge to Hamilton and Bottas had to settle for second.

"It was stuck underneath his car," said Toto Wolff. "It was debris he over ran over on lap two and he couldn't avoid it."

Ironically, Pirelli believes that it was debris that caused Verstappen's retirement also.

"Obviously we need to look at the medium tyre to understand exactly what happened," said Mario Isola. "It seems that some debris on the track could have caused a puncture."