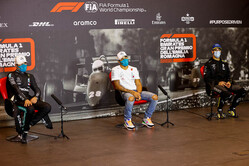 Q: Daniel, you're getting pretty used to being up here. Another third place in three races. How did that pan out?
Daniel Ricciardo: It was a bizarre one. I got into fourth off the start and I felt that was obviously the best we could do with the three at the front. But then Pérez had really good pace. He passed us through the pit sequence and then I think he pitted for the soft at the end with the safety car. We obviously kept track position. I'm not sure what happened to Max but that obviously put us in the fight. Kvyat came out of nowhere in the last few laps, but it was fun. Two podiums in three races as you say. It all just happened very quickly at the end there. It was fun.

Q: Good opportunity to do another Shoey. Is Cyril going to get another tattoo on the other side now as well?
DR: He actually just said: "congrats, but I'm not getting a second tattoo". So maybe someone else in the team. But today I won't forget the shoey.

Q: Is it a cool track to race on?
DR: It is. It obviously is pretty difficult for overtaking but the actual circuit itself is awesome. It's mega.

Q: Valtteri, you started on pole, you got away perfectly. But you were fighting wounded there. I think you picked up some damage up towards Turn 7 that you couldn't avoid?
Valtteri Bottas: Yeah, I think that made quite a big effect today. The start was good. That was one of the main things to get right today. But on lap 2, suddenly, out of Turn 7, there was debris. I didn't have time to avoid it...

Q: Did you see the debris then?
VB: Yeah, I saw it. I aimed in the middle of the car, at least I tried to no run over that with the tyres but obviously it caused some damage or something that made the car quick difficult to drive.

Q: I guess it was very difficult because we saw Max pressuring you towards the end - a few mistakes and lock-ups - but I guess we can put that down to a lack of downforce?
VB: I was really pushing hard to try to avoid Max getting through. I had to push over my limits and that led to a few mistakes so unlucky.

Q: Lewis, outstanding. You obviously broke the record for wins last time out but to come here, perfectly managed on the radio, your strategy, how it all played out and I guess you are delighted?
Lewis Hamilton: It was an exhausting race, the speed we were having to go. Obviously I had a poor start. It's just very overwhelming right now because I look at my crew, this team here. And I know all the guys and girls... the men and women back at the factory, back at the factory in Brackley and Brixworth who... They are the unsung heroes. They are the ones that have really grafted away and never given up. They have just continued to push and elevate and innovate. People watching maybe think we are used to it but it always feels like the first with this team and I think that's because of the spirit and so I am forever grateful to everyone to be a part of it, to be a part of breaking a breaking record like this. No team has done this before. We have a great leader in our team and also a big thank you to Mercedes, Petronas and all of our partners. We wouldn't be able to do what we do without them.

Q: Seven consecutive Constructors' Championships. That's mighty force behind you?
LH: It's unbelievable. To come back year on year... I'll tell you, whilst we have great performance it's not easy to deliver weekend-in, weekend-out, and for everyone, they are so precise with how they take the car apart and put it back together. Whoo! Seven-time champs. That's something I'm going to be able to tell my grandchildren one day.

Q: Toto, can you come in please. Toto, we don't often see you as elevated as you are. That's seven consecutive Constructors' Championships. Lewis broke the record for wins last time out, you can see what that means to all those involved here and equally back at the factory?
Toto Wolff: Yeah, I'm not so much into numbers but this is something to be proud of really. We have a group that is just amazing together. We've stayed together, we've tried to push the benchmark to new levels and we've achieved that and it's just a super proud moment with all these guys and being part of it.

Q: Where do you go from here? I guess you just regroup and you just set that bar even higher again?
TW: Yeah, as long as we stay motivated and energised, and you see that within these guys, then I think we can push it furthermore. There will be competition, no doubt, next year, with Max and Honda trying to do a really good job towards the end of the season, so we are looking forward to a new challenge.

Q: You don't win these championships without having two good drivers. Valtteri was wounded today though. What happened there?
TW: Valtteri had a, I think it was a Ferrari piece or a Racing Point piece, about that size, stuck underneath his car. It was debris his overran on lap two. He couldn't avoid it.

Q: Lewis, another great win to add to your collection - and a shoey! Be honest, what did it taste like?
LH: Hahaha! Toe jam!

DR: Not as bad as you thought?

LH: It definitely didn't taste great. I mean I don't really like Champagne as it is, but it definitely tastes worse. But what's positive is that Daniel's mum thinks I was a good sport, so I'm grateful for that. I think Daniel had said that I'd once said never, that I would never do it. So there's a lesson - never say never. It was a good moment... I don't know I'm just feeling incredibly proud of this team and you know, to live in a moment where we see a team so successful and to be a part of it is quite phenomenal. Something that it the real honour of my life, working for this team and for all these people back at the two factories, Brixworth and Brackley. You know they really are the unsung heroes that are not on TV every weekend. They're the guys that are working flat out every day during the weeks, crazy hours, to build and to innovate, to raise the bar, so that we can come here and do what we have done today and this year. I really don't take it for granted that we have had this success. People could say 'oh, you must be used to it', and obviously maybe the fans are used to it, but from working inside the sport, you never get used to it. From tomorrow we'll be focused on what's next. We'll be focusing on how we can be better. On Wednesday we'll be having a big team meeting, trying to understand what could have been done better. We'll have an analysis of what the next car looks like and what's needed to raise the bar with the engine, with the driveability, with the ride, with tyre usage, all these different things. That's because at the core of this team is some real heart and so a big thank you to everyone.

Q: How different does winning the Constructors' title feel to winning the Drivers' title?
LH: It's almost more exciting winning the team one. It's a very strange sport in the sense that it is as team sport but there are two championships and then there is an individual championship, but what is at the core our job is to deliver points and results for the team. So when you win a team championship I think it's almost better than an individual because it's something you do collectively, with a large group of people and whilst we are the ones standing on top of the podium we are not above anybody. We are on the same level, we are all part of the chain links. You can tell that everyone is so happy when they get the Constructors' title. When we do the Christmas party and we celebrate with everyone, everyone just knows that they did a remarkable job and that they have done something that nobody else has done before. That's cool to be a part of. Even if I was to stop today that would be something that I would be able to share with that large group of people for the rest of my life.

Q: And a quick word on the race. What was it like in the cockpit?
LH: It was incredibly intense, very hard, physically quite draining as well, and mentally, mainly because it's a very fast circuit, very bumpy. Valtteri got a great start. I thought I would get a better start today but it didn't turn out the way I would have liked and I fell to third. My next strategy was to try and get by the Red Bull but it was just impossible to get close and in trying to get close I was killing the front tyres. So I backed off and just tried to keep within distance. Then Max stopped much earlier than I thought he would and Valtteri stopped to cover him and there was no way I was doing the same. Naturally, at the beginning of the race we get given a bunch of different options of strategy and I understood that if I was in that position the only way to do something was to do something different - to extend as long as I could. But I didn't know how long that tyre would go, but I think that's where the race was won today.