Wolff admits to looking for a successor 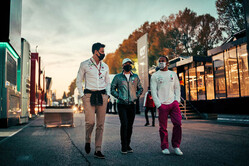 In all the excitement it is easy to forget that despite the 'announce' confirming Valtteri Bottas for a fifth season at Mercedes, there is still the little matter of agreeing a new deal, not only with star driver, Lewis Hamilton but team boss, Toto Wolff.

Both have continually played down the urgency in signing on the dotted line, citing the pandemic, among other things, as the reason neither has yet officially committed.

Hamilton will almost certainly continue, after all, what team can offer him the opportunity to become the most successful driver in the history of the sport in terms of titles, not to mention the silly-money salary.

Wolff's future is not so clear-cut however. Despite the denials it is understood that certain people within the Daimler organisation are not entirely happy with the Austrian's star status within the sport, not to mention business interests that could be perceived as being in conflict.

Speaking to reporters in Imola, Wolff admits that he is already on the lookout for a successor, for while he is confident in agreeing a new contract with Daimler, at some stage in the not too distant future there will be a need to restructure the team.

"The truth is that it's taking a toll on all of us," he admits, "and I've always been of the opinion that you should never go from very good to good, because then somebody else should take the baton and run.

"I still feel that I can make a contribution," he continued, "I actually enjoy the race weekends a lot. And I've come to enjoy them more since lockdown. I just need to think how I would like to structure the team going forward."

Mercedes previously had to restructure when Paddy Lowe made his ill-fated move to Williams in 2017, and James Allison joined the German team from Ferrari.

"We had a great handover of responsibilities, whilst keeping the know-how and the senior leadership in the company, but also not creating a bottleneck for the young talent to come up," said Wolff. "This is something which I find very interesting, and looking forward into the next few years, it would very much make me proud to see a team principal coming up, taking over from me and doing a better job than I could have done at that time. This is a really interesting project for me.

"I don't feel that I will let the team down. I'm a shareholder and I will stay with the team, that is what we have agreed with Daimler, but maybe then in another function. Whether it is CEO, or chairman, we haven't figured out yet.

"Daimler has very much given me the choice," he adds. "But, before me transitioning into a new role, I need to make sure that somebody else is doing the 23 races and I can enjoy myself in front of a Zoom screen."

Asked about speculation that he could move aside as early as 2021, he said: "I've spent quite some time thinking about it, and also involving the leadership within MGP, and we haven't identified the structure for the future. So, I can't tell you whether it is a year, two or three.

"But, whilst enjoying myself, I also need to make sure that there is a transition sometimes in the future, and I don't know when that is because I haven't identified the right person yet."