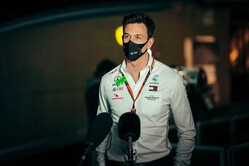 Coming towards the end of a season in which F1 has proven to be more adaptive than many other sports - no doubt driven by the reality that no racing means no money - as more countries go into lockdown ahead of the so-called second wave (even though the first wave hasn't gone away), Mercedes boss, Toto Wolff confirms that the sport is already reacting, aware that it needs to be prepared for any sudden changes.

Only this week, a last minute decision by the authorities in Italy means that this weekend's race will go ahead behind closed doors, leaving the Bahrain events as the only remaining races on the 2020 calendar that might allow spectators.

"It has been discussed in Monday's meeting because things are getting more complicated," said Wolff, referring to the meeting last week of the F1 Commission.

"We have done very well in travelling as a bubble," he continued. "We had cases in F1, but they were very, very few only.

"I think we have reacted in the right way. In that respect I think us going to a race track, we don't really put anybody in danger because we are there, in our little micro cosmos.

"But you can't ignore the fact that numbers are on the rise," he admitted, "and that it could come to a point that some countries close their borders, and that obviously is going to affect F1.

"As it stands, and the information we got from Chase, is that everything looks like going forward. But, as he said as well, we don't know what is happening next week with those numbers on the rise, and we have no idea what happens in a month's time. So I think we just need to be adaptive."

To date, F1 has carried out 64,779 tests since the start of the season, with only 55 proving positive.

However, on a day that Racing Point admits that it has had seven positive tests, including its team owner and both drivers, as England looks set to follow the example of several other European nations and go into national lockdown (again), it is clear the sport can take nothing for granted.