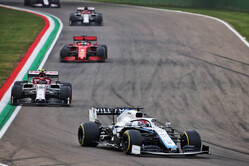 Finally, after the many near-misses, it was looking like it was finally going to happen, George Russell was heading for his first world championship points.

The driver, who 48 hours earlier had been assured of retaining his seat for 2021, and was tipped by Fernando Alonso as a star of the future, was going to give Williams its first point(s) of the year.

However, as the field followed the safety car following Max Verstappen's tyre failure, heading down to Tosa the Briton applied just a little too much throttle as he sought to generate heat into his tyres and lost it, spearing into the barriers.

While the subsequent extension to the safety car period caused problems for the likes of Sergio Perez, Russell walked away from his stricken Williams, sat down beside the track and began thinking of what might have been.

The TV cameras picked up on the Briton, sitting down, helmet firmly in place, and as he indicated to the marshals that he wanted to be left alone, the heaving of his shoulders made clear that he was crying at this lost opportunity.

"I don't really know what to say," he subsequently told reporters. "I was working as hard as I could to keep the tyres working. I was pushing the tyres throughout the race. It's probably the most on the limit I've ever been throughout the whole of the race.

"I think it was really showing and we were in such a good position. Obviously I went over the limit," he admitted. "As soon as I lost the car it was already too late and I was in the wall. I'm really sorry for the team and unacceptable from my side.

"I was accelerating, I was changing gear at the same time, with cold tyres… this sometimes happens with cold tyres. It was my job to try and work them as hard as I can to try and keep Kimi and Sebastian behind me who were on new, hot fresh tyres.

"But no excuses," he added. "I'll go away and learn from this and try to come back stronger next time."

Asked what it would take for him to finally open his points account, he replied: "I don't know. Not make stupid mistakes like I did today.

Subsequently taking to social media, he posted: "I'll never forget this day, this mistake. I'll learn from it, be stronger for it. I'm so sorry to the whole team, no excuses."